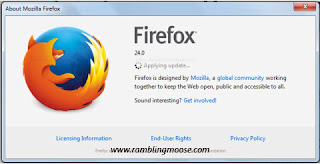 Getting caught up this morning I spotted an article speaking about how Firefox has been updated.

The short of it is that it's more stable because they patched some internal stuff.

Internal stuff like memory problems and stability issues.  This is for Windows, Mac, Linux and probably iOS and Android too, but I haven't gotten to the last two yet.

I was finding that Firefox 24 would simply pause.  Since I have on any given moment about 30 to 150 tabs open, that's kind of scary.  Most of what I was doing would just... pause.  Pause for a couple minutes, so I was losing a fair amount of time when it would happen about once an hour.

Upgrading is pretty painless.  I clicked on Help, and About, and found the picture you see above.  Didn't even have to click on a button until it was done.   When done the "Applying Updates" message changed to a button saying Restart.

Since that's done, I can get back to developing web pages, search engine optimization, and other "web development tasks".

If you want all the deep and dirty info, here's the article that I found that told me to check.
Posted by Bill at 9:28 AM