The Returning Hedges of Wilton Manors 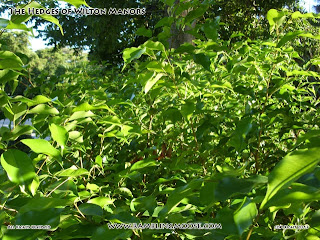 Running around town we've started to notice some rather interesting things.

Way back in the day, when we were all younger and more spry, South Florida had a lot of hedges of a specific type.

You would go by a bank or a shopping center or some such and you'd look down at an impenetrable knee level green wall.  They were typically Ficus Benjamina, the Weeping Figs that people would have in a pot up North that would grow quickly in summer and mope all winter.

They shape incredibly well and if  unmolested, they'd grow quickly.

The problem was that over the last few years they got molested.  Badly.

If you want to see the results of what happens when mankind gets things wrong with the environment, South Florida is a great place to see it.   We've got waves of invasive species like Curly Tail Lizards, Iguanas, Ball Pythons climbing the walls and making a mess of things by eating up the plants that belong as well as the ones in the gardens.  For an Iguana, a Hibiscus is "crack".

Hibiscus hedges were once popular too, in fact the Fountainbleu Hotel on Miami Beach had a spectacular hedge that would have these beautiful red blooms that pop out here and there.  For a snowbird, this was mindbending.

One of the waves of invasives were these mites that attacked the Ficus and basically turned them into stick figures.  Since people planted these trees in clusters and hedges, the mites would go from one tree to the next devastating the growth.   Homes would become visible from behind walls of green that had disappeared.

Treatment methods were fairly severe.   You would have your plants sprayed monthly to save them, but for the most part people would let the mites go at them and pull up the remnants.

Natural Selection being what it is would leave a tree here and there alone standing its ground as its neighbors disappeared.

When winter happened, the mites weakened, and if we'd get a cold snap of a night into the high 30s, many of those nasties would simply die.

Fast forward a year or two and things have stabilized.  The mites are a food source for other insects, the climate here isn't quite perfect, so the good news is that these plants are rebounding as well as the rest of the environment.

Now if we could just get a good solid cold snap this winter of a couple nights a degree above freezing it would get rid of some of the rest of those creatures that don't belong.