More Monarchs In The Goldenrod 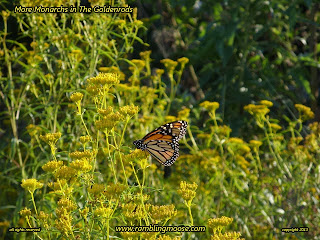 After Mr Dog got used to the trippy wonderfulness of having Monarch Butterflies flutter around us as an orange and black cloud, I was able to get back to my Amateur Photography.

Not having The Right Equipment forces you to get creative.  My camera is better than your average phone camera, but not as versatile as a Digital SLR.  You know those big bulky cameras with a removable lens?

It's not that I can justify having one either.  The next penny I earn from the blog or my photography will be the first.

So make do and mend as the British said during the Austerity period.

That camera is why I can still justify buying a Junk Box or Random Box of Crap when I come across them.  It was one of seven items that I bought for $3 with $5 shipping.   Yes, a camera that cost me $1.17.  No, I won't tell you how to find one either.  It was Random, and it reminds me I have to look into those sites again.

But when you have a willing subject, take advantage of it.

I stepped into our little park and spotted this beauty.  He was standing on the goldenrod, at least I think it's a goldenrod, having a meal in the Golden Hour Sun.  Rack had wandered in with me and was doing his business - sniffing a clump of that purple ornamental grass and enjoying the scene.  He's a patient soul, allowing me at that time to get this in focus.  At least he is patient when one of his canine friends isn't about.  It was one of those times I didn't have to take a dozen pictures for one good one since all lined up just right for me.