Prairie Dogs in my Living Room

Wilton Manors, after 7pm.
TV is on to some mindless comedy, time shifted away from that commercial nonsense.  I mean, really, who watches commercials on TV?
Windows closed, but all is dark.

All of the sudden, Rack perks.

Ears pop up, and I hear a high pitched whine.   He's saying "I'm excited".  That seems to be the way of life here, an excited McNab Puppy is an on'/off thing.   Either curled up in a dogball, sniffing quietly under the parrot cage looking for dropped food, or running around the house burning off energy.

Who knew there was so much energy stored up in a cup of dog food, twice daily, plus two tablespoons stuffed neatly in a tennis ball or Kong?

Sitting bolt upright in a shot, the high pitched and reedy whine continues.

He's parked next to my couch, near my feet.  This was the first spot he relaxed enough outside of the crate when we first got him, so he's claimed it as his own.   Instead of sitting on the mat that we lay out as His Spot, he chooses to lay down on the tiles.   It must be to warm the floor up, or cool himself down, because that spot isn't as comfortable as being on a plush mat.

But that's the nature of things with a dog.   We call it "Dog Logic" and smile as we shake our heads in confusion.

It's amped up another notch.   He's standing and whining now.

At this point we're both looking at him and outside to see what is going on.

Nothing is readily apparent until... 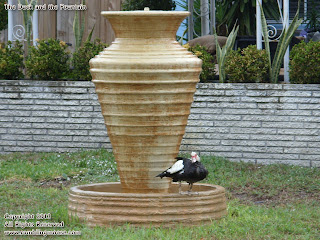 He stands up, feet on the couch.   Now he's able to look out across the hedge into the early evening gloom.  Outside by the large fountain that our neighbor has in the yard that we call the Dog Bowl, I spot the reason.  140 pounds of Rottweiler, painted golden brown in the yellow glow of the streetlights is mooning us.   He's drinking in the catch basin of the fountain, and basically romping in the yard.

Yes, it's a 140 pound Rottie that's named D.O.G.  What else would you name a 140 slab of canine that wriggles its non-tail every time it sees you and says hello by sidling up to your knees and standing there demanding to be petted?

Rack's tail is dusting my coffee table.   He keeps that table cleaner than I am, since I'm a shoddy housekeeper.

That reminds me the Kitchen's due for another mopping...

Rack is happy, he sees his friend, and knows that all is well.

If you ever doubt that dogs sometimes have friends, rather than an official "pack", you are probably not watching closely.  My own Rack will go through stages.   First an ear perks, then two.  Then the tail starts wagging.  That's about when my own mind thinks "I wonder if he's going to..."

And Rack begins to leap.

He'll do this when he sees certain dogs.  He's now getting much more selective about who he leaps about, although almost every dog will get at least to the one or two wag stage.

But D.O.G. is on the happy dopey leapy list with Rack.   In fact, so is his owner, Kirby.   If he sees Kirby, he's been known to do the jump in the air act.   Dog owners, or even D.O.G. owners, will get the "free pass" and be friends, non-dog owners may get the cold shoulder.  It is a leftover from his experience in the shelters.

Last time he saw Kirby, a biker type who has a motorcycle that I really do want to borrow for a ride down to the Keys, he jumped.   Jumping in the air wasn't enough.   D.O.G. parked himself in front of Kirby and ended up being stood on by 43 pounds of happy McNab Dog.

Yes, Rack climbed on top of a Rottweiler in order to greet my neighbor.

Luckily nobody seemed to mind.

Other than me that is.   That leaping can be a bit much at times, and we're getting a reputation.  People and big dogs generally don't like to be climbed on, and he's still wary enough of strangers than to try that act in public often.

After all, how many times do you have a spare 140 pound Rottweiler around who is willing to be a foot stool for an over-exuberant McNab?