The Fearful Dog and the Visitor from Key West 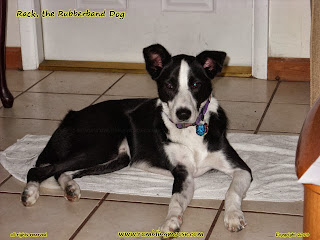 He has a habit of making plans that do actually come to fruition, but not when he plans.   Give them another six months of being On Hold and they eventually happen.


It's October, this was the "April Visit" so it is all on schedule.

The last time David had come for a visit, it was right after Rack had arrived.   We were all still getting ourselves sorted out.  Lettie was gone, but her presence in the house was strong.  Rack had just joined us and was hiding at the drop of a hat - or anything else in the house.

He still won't go all the way into the kitchen from the one time that he nosed the trash can and the small one quart bowl that I had perched on top of the lid fell off the top and hit the ground.

I drove down to Fort Lauderdale and picked him up at the shuttle for a warm greeting.  He's a Brother From Another Mother, and I'm always happy to see him.   The visits are never long enough.

The ride back was the usual chatter.  Discussing where he was, where I was, what happened as we neared the place he was staying a couple miles from the house.

We both wondered what would happen when he came to visit us at the house.

Not to worry.  True to form, Rack was entertaining.

I pulled up in the driveway and stepped into the house.   The tell tale tail thumping said that he was happy to see us.  But it wasn't quite as vigorous as usual.

Never doubt a young dog's capacity to learn.  In his case, he learned quickly someone else was coming.

I sat on the edge of the bed and opened the crate in the bedroom and got the usual wet noodle wriggling.   He decided to walk out into the main part of the house when all the sudden the race-memory of a real life Cerberus with all their three heads came alive.

I clapped my hands and brought the canine fury to a close with a rumble.

Rack you had your say now stop!

The fearful dog's ears went down low which is a feat for a McNab Dog.   The barking ceased but became a low rumble.   He knew that he was overruled and outranked, Dad had control.

Never bark at a Moose, you silly mutt.

Each time David arrived from a wander out on to The Drive for a shopping foray, or just a smoke, we went through the WooWooWooWoo security bark.  It actually was a pleasant surprise.  Lettie was the complete Stealth Dog - you simply didn't hear her.   Rack would be more assertive with letting you know who was about the house.

Good, in any urban environment you need that sort of warning.

One good thing about McNabs - they learn.  Quickly.  Alexander McNab did an excellent job at creating a supremely intelligent breed.  Smarter than the rest, we seem to believe.

Each time David arrived from the wander, the fear barking and the alert call got less strident.   It calmed down to a mere grumble by the time the visit drew to a close.

Once he was in the house, David was accepted, but it was the shock of entry and trespass that Rack disapproved of.  Yes, you're being judged by a dog, he lives here, we need to accept that.

Any time someone was having a vacation, it was a time for exploration and David is not exception.  He'd leave and come back all afternoon, and we'd have another time to watch the slow ratcheting down of my Hair-Triggered dog.

Rack didn't like the fact that David would take over His Spot between the couch and the coffee table.  It was a den of sorts, and comforting to the little fur bagel.  But being next to the couch, the table had yet-another laptop placed on it, and David would be doing his business on it.

Up for a coffee or cuppa-tea, Rack would get up and wander over and plop down in His Spot.  Right under the laptop.

Coming back to sit down and David would try not to disturb Rack.   Too late, he was out like a shot to go back to the mat or into the crate in frustration.

From my usual spot in the big green chair in the window, one time when David was returning I simply said "Oh!  There's David".   Rack got up and darted out of the living room to go back into the crate.

I think he's looking forward for the trip to end.

The point of all of this is that the Fearful Dog takes training just like any other dog.  It just takes a different style, a different discipline.  Gentle and time consuming, but effective.  Having David by might have annoyed Rack, but it also worked on his shattered soul.   By the time David's visit ended, the warning barks did as well.   He's learning that there are inside people and outside people, and how to deal with them all in the end.