The other day when I wandered out of the house, I had no real agenda.  Bring the camera, be creative, have fun with it, and see what you find.

What happened was that things found me.

I walked into the little park near the house with Rack.  He walked deep into the cul-de-sac of a walkway and right up to the stone plinth that sits there. 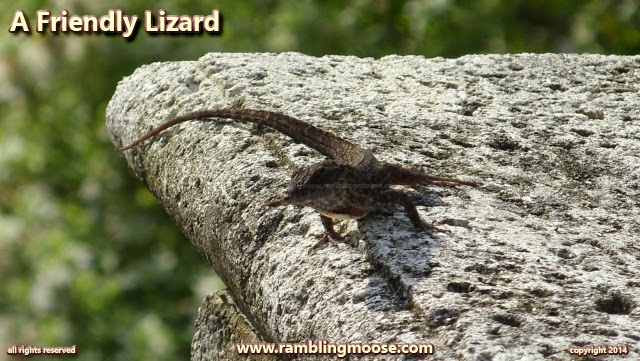 On the plinth there is a small piece of art.  A green copper butterfly that is held up on a shaft of what looks like wrought iron.  Some fool tried to remove it when the piece was installed and got frustrated.  In trying to remove it, the shaft was bent to an arc of about 90 degrees.  Luckily it was repairable, which is something I'd wager you can't do to that ne'er do well's karma.

I did notice that Rack was pointing out something on the plinth that wasn't normally there.   A Cuban Brown Lizard.

I am amused by these creatures.  Usually I'll look at them and they will dart off into a hiding place with me chanting the mantra of "Run! Gecko, Run", even though they aren't actually geckos.  They're really quite shy.  Their reptile brain sees a large human coming at them and fearfully thinks that it's time to go.

In this case, the little creature was as interested in us as we were of it which accounted for the novelty of the situation.

I was able to use the camera and zoom into the little being's personal space and fire off quite a few shots.  I fully expected it to move off somewhere, but it just insisted that I do what I needed and try my best to record this encounter.

The plinth having that rough finish that we see around here frequently, has aged well.  The pits of the concrete were collecting tiny micro biomes for creatures to colonize.  The mildew that formed in them showed in the black accents on the North side of the craters, just like the moss will prefer the North side of a tree.

Having gotten my last picture of the series, my little friend used one of those craters to have a drink of some collected dew that remained after the morning sunrise.  His reptilian brain not registering fear, he stayed put while I went on my way, leaving the encounter and the park behind.
Posted by Bill at 9:55 AM