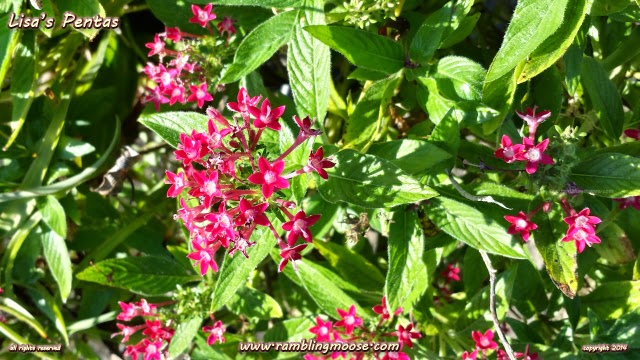 I think my friend Craig has given me a new set of eyes with which to see the world.

Having been given a new to me cellphone, I started learning how to use it.  The camera in it has more megapixels at 14 mpx than my older stand alone camera.  More importantly, I am able to take more kinds of pictures than before.

While the lens in the old camera had a much better zoom on it, I was limited in how close I could get to something.  The result was that I had to crop too much out in order to get to the picture I wanted.  The cell phone, a Samsung Galaxy S4, allows me to get within only a few inches of the subject.  I've been taking pictures of things that I couldn't even see before without a magnifying glass.

Having been stuck in traffic with the phone, someone texted me to find out where I was.  I took a picture of the car in front of me stuck at NE 3rd Ave and Broward Blvd with the words "Going to FLL", and got back the word "Huh?" and responded Airport and was done with that.

Fun to be a smart alec at times, isn't it?

But getting really close to subjects was something I thought was limited to a proper DSLR and a Macro Zoom.  The extra optics would help in some situations, but there are just so blasted many dots in the raw pictures that I would have to scale it down to print out a "Photograph".

The rules are that it should be at 300 dots per inch.  The camera puts out, therefore, a 13.75 inch by 7.74 inch image.  A little judicious cropping will be in order, but this is capable of putting out something that could be printed on a sheet of letter paper without scaling and losing detail.

One late afternoon, bored and armed with the camera, I went out back.  I take a lot of pictures of the backyard, including video.  Trying not to be repetitive, I did notice that I could get closer than I expected to my subject.  Why not run with it?

I have a penta plant in the pot in the yard.  It was given to me by Lisa a while back.  She had bought three, and she only wanted two.  I wasn't completely sure what to do with this riot of red inflorescences, so it went on the irrigation chain and later into its own pot.  I figured that it was going to survive in my Darwinian garden or get selected out.  It has done well, although it needs to have the spider plant that I dropped in there with it removed.

In my climate of never-freeze South Florida, the Penta are a small shrub.  They also produce seeds so I can propagate them.  Yes, more flowers from yours truly, we'll need more pots.

Lisa's gone, a great friend and a Big Sister to us all, but her flowers are still here.  Just the way I like it.  After all, it gives me a subject to practice getting too close with a cell phone and pretend I'm doing "art".

Or just share Purdy Pixturez with my friends.  Isn't that what life is about?  Sharing with Friends?
Posted by Bill at 9:32 AM