There's this plant.  It's in the yard.  Actually it is out on a rock.  I never expected it there, but it made its choice and it is thriving.

We had a lot of this stuff all over the yard.  It's called Moses in the Cradle.  Some folks grow it as a 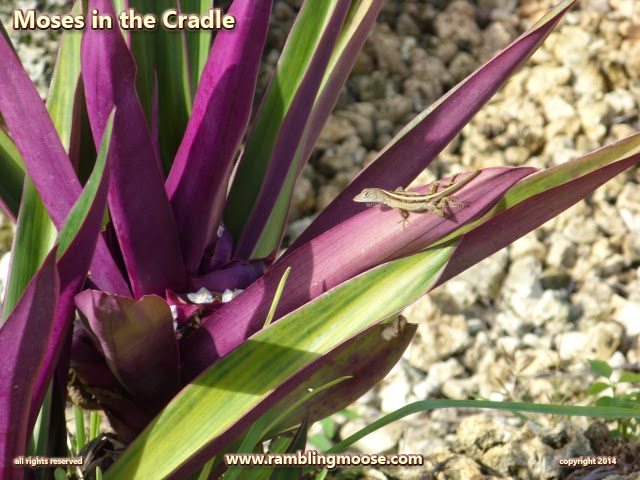 houseplant.  Others use it for ground cover here in South Florida.  It can be invasive here, and that was where I came in.

Behind the house there's a big bougainvillea arbor.  Beautiful flowers, nasty thorns.  I have never worked with the plant where I haven't gotten stuck with those blasted thorns.  I won't plant it anywhere, but I can't bring myself to kill it.  After all, why would you kill an arbor that is 10 feet tall, 25 feet wide, and provides a riot of magenta flowers all year around.   I moved here in 2006 and it has never stopped blooming.

Under it were some ground cover plants that got overgrown.  Lots of weeds growing in the middle of it.  A fair amount of the Moses plant was in a clump under there too.

The Moses in the Cradle I knew from pots up North.  I never knew what it was, but people liked growing it and it does well in "Bright Indirect Light".  It is also highly drought tolerant so that is a plus for gardens and for indoor pots.

All of that stuff was needing attention and someone told me that the Moses was poisonous.  It isn't, the sap will irritate the skin with some people.  Just wear gloves if you are going to trim it.

We panicked and the decision was made to once and for all take everything out from under the big bougainvillea arbor. I got out the weedeater and denuded it all.

Everything was gone.  I was left with soil.  Of course, this being Florida, stuff came back.  The Moses returned along with a healthy crop of stinkweed vines and some other stuff that I don't know and don't want either.   The plan is to cover it all with landscape cloth and mulch and have it "Look Good" for a few years.

The plan.  Some day.

One April we had in the landscape team.  This is how I think the Moses got out to the front yard and growing on the rock.  The instructions to the team was to leave the cuttings in the parking space out front for bulk trash.  Oh and could you save me time by cleaning out the gardens and the hedges?

We had a monstrous pile of Sea Grape, Night Blooming Jasmine, Bougainvillea, weeds, and whatever weird cuttings they could put out there.

There had to have been a seed from one of the Moses plants, because a couple months later I saw one little plant start.  In a piece of rough cut coral.

Since the irrigation system gets it twice a week by accident of place, I am assuming it's a happy camper sitting out there in the full sun.  After all, by now I'd say it is about 3 years old.

It also gives the lizards a place to hide when they need it, and a place to sun when they're cold.