I hate to say it, but I don't believe in "Outdoor Pets".  If you truly love something, especially something as social and as intelligent as one of the species we keep as pets, you will want them around you.  Otherwise you're asking your neighbors to keep a pet as well, and they may not want your choice in a pet.

There are exceptions.  I'm sure I will hear them.  But for the vast majority, keep your pets safe, with you, and inside your house.

I think this may be one of the exceptions.

Of course I do, after all, I'm special, and I count, right?   Short yellow bus kind of special, perhaps, but special nonetheless.

Here in Wet Season Florida, wildlife is living fat and happy.  There is plenty to eat, lots of places to hide to sleep and shelter, and the living can be easy.

Unless there's a hawk overhead, then you had better duck and cover.  My parrot will tell you about that.  He doesn't like Opossums either since they tried to eat his food that one time.   He stays inside the house making a mess on the room divider.  He prefers it, I would prefer if he learned to clean after himself.

Sometimes that wildlife makes its presence known.  I've had snakes get in the house, and although that itself would have been fascinating to watch, it would be better if the black racer stayed outside.  I should say "Snake" since it only happened once.  Black Racer.  Maybe it mistook the meal I had cooking in the crock pot that day for a tasty mouse.

That says more about what I cook than its homing instinct.

I had noticed a while back that there was a frog on my window.  The Florida Room in the back of the house.  It was well before sunrise, I heard a sound on the window like someone slapping a piece of meat on the counter.  Going out to investigate, I found Kermit's Cousin out there glued to the glass.  Taking a picture of the little creature, I smiled, and let it go on its amphibian way thinking little more of it.

A couple days later, in the middle of a gap between thunderstorms, Kevin spotted another frog on his vehicle parked in the drive.  Using a flashlight, we managed to get a picture, laughed, and we let it go on its amphibian way thinking little more of it.

The frog kept showing up.

I'm about two weeks into the future.  Or wait, maybe time has marched on.  I know the frog hadn't.

I was in the dining room of the house and looking into the Florida Room one morning.  Having turned on 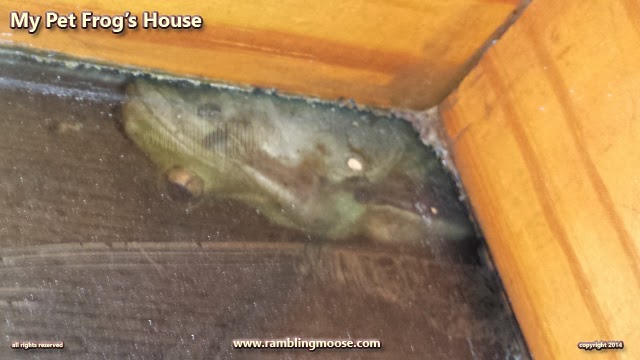 the lights, I noticed something stuffed into the corner of a little nook in the woodwork.  The whole area was only about as long as your hand, and maybe as wide as your palm.  Not more than 6 by 3 inches.  But it was a gap.  That wood on the outside of the house had a small air gap there of about an inch deep.

No I don't know why they did it that way, it seems strange to me too, but it is there.

No I don't think we will 'fix it' just yet.  It's treated and not prone to anything nasty.

Our friend, the tree frog from weeks gone by, has adopted our little air gap as its home.  I think it may be able to see me inside the house, but only because it has eyes that rotate on bulges.  It really doesn't have enough room in there to twist itself around and actually look at me.

Or that's what I tell myself.  Having Kermit whisper "I see you and I know what you do" is a bit creepy, even if it is just a tree frog that took a liking to my strange Florida Architecture.

Mid Century Modern.  Painted Salmon, faded over the years, stained by rust from the irrigation in spots.

Every morning for a couple weeks now there is a ritual that we go through.

About an hour to a half hour before sunrise, the house is fairly quiet.  If there is any music playing, it's not too loud as if to rouse the house.  The parrot won't allow that anyway, he'd try to sing along.

In this quiet I hear a familiar sound.  "Thwack!" as the frog's body hits and sticks to the window with the pads on its feet.

I know it is climbing the walls.  Trying to get to one of the two little cubby holes that it has claimed as its own, it makes its way up the glass.

By the time sunrise happens, our outdoor pet frog has sidled into position, in the corner, and settles in for his daytime sleep.

This has happened every day save one in the last few weeks.  That one day, I found myself missing the frog.  It wasn't there, and something wasn't quite right.  Laughing at myself, I realize that it will probably go somewhere one day, burrow into what passes for soil here, and hibernate until the wet season returns in May or June and we may have this happen again next year.  It's possible that its children may try the same thing, and it is also possible that my Froggy Florida Room will be Frogless forever.

Or something else that starts with the letter F.  You choose.  But for now, it's for Frog.  As in Frog House.
Posted by Bill at 9:55 AM