Weeds and Lizards - And HDR Photography

I actually enjoy taking pictures.  There are a lot of pictures that I have taken that are strictly for me.  After all, how many pictures of your dog being cute, or that particular friend walking into a wall can you inflict on people?

Not everyone shares "your" enthusiasm for a subject, no matter how good you are at it.

So I meter myself, restrict what I show, and self-edit a bit.

But trust me, I have "gigs" of pictures I have taken since the beginning of the digital photography era.  I'll keep doing it, and I'm getting better at it.

If I bore you with it sometimes, sorry, maybe the next picture might be something we both enjoy.  I'll try harder.

All this was running through my mind lately when I was having a chat with a good friend, Craig.  He lives up in Atlanta and a while back told me that he had an old phone that he didn't need.  "Oh, really?"

It was a massive upgrade for me, and I'm beyond happy to get it.  I've changed my phone plan to allow texting and to get a gig worth of data per month.  I am being conservative there, but why spend when Wifi is so available, right?

I've gone back to T-Mobile and rightsized the plan.

Plus my old phone, a T-Mobile MyTouch Q was so slow that it literally took 10 minutes for it to come up.  It was that lack of speed that stopped me from really using the smartphone as well as I knew I would.

He knew I'd have a lot of fun with it, and, well thanks again!

That display literally lights up the hallway when I turn it on at 5 AM in the bedroom.

Talking about the phone, Craig shared with me some ideas to make things more interesting.  Cellphone cameras.  This one has a 14 megapixel camera.  Great, about another 50 percent better than my standalone camera that I have been using for years.

Cellphone cameras have one big limitation, the lens is fixed.  You can't really zoom in and out with one, they are just taking a digital scissors to the view and cutting it down.  It forces me to put myself in just the right spot where an optical zoom lens would let me do things a little simpler than having to get reeeeeealy close for that closeup.

But on the other hand, if the programmer who wrote the camera software was good, the camera can be amazing.

I'd say that Samsung had some very good programmers when they wrote the software for the Samsung Galaxy S4.

There are a couple of things I can do with the camera that I couldn't do before, one of which is a little controversial.  It's called "HDR" or High Dynamic Range.   HDR photography takes three pictures in rapid succession, so you need a faster processor than you might have before.  First an underexposed picture, then a "normal" one, then an overexposed picture.  The three are blended together and presented as a final picture.

Craig asked me had I ever played with it?

I'm finding HDR to be an uneven technology.

Spotting a weed growing from a plank, it caught my eye as pretty typical for Florida.  Drop a seed and it 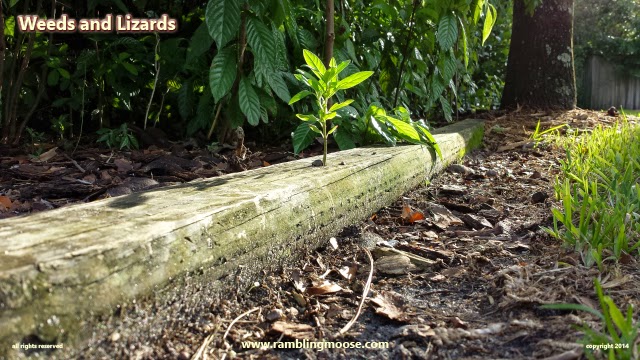 will grow or be eaten.  So during the golden hour dog walk that evening, I took a normal picture.  Then I took an HDR Picture.

The normal picture had deep greens in the shadows, but the representation was a bit darker than my eye perceived.  I think the camera's auto mode was looking at the weed in the foreground and using it to figure out how bright everything would be.   Otherwise, this is a very competent piece of equipment.

Then the HDR picture was taken.  The angle is slightly different, and I can now see what the difference was 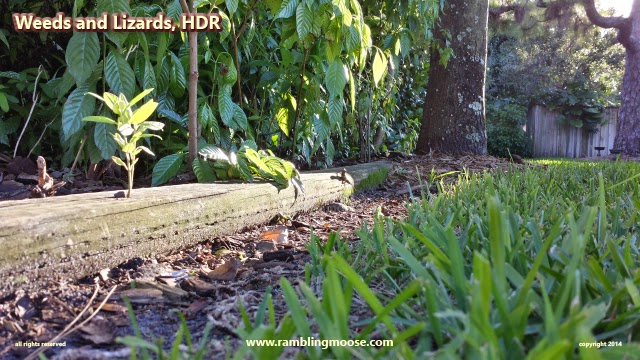 with the HDR.  There is more of the darker areas shown.  It popped more, however the darker areas near the sunlight shaft were a little hazy.  No, I hadn't left a thumbprint on the lens, I'm thinking it's the code for this particular situation said bring it all up and make it more "contrasty".

I would say that the HDR picture is more true to what my eye sees in the scene.  At that time of day, the fence in the background is highly visible, and the darker areas of the plants aren't really back into the gloom.

The way I see it is that it is an interesting technology, well worth playing around with.  On the other hand, good old "normal" photography could be just what you want.  Since you won't know until you get home and look at it on your computer - Use Both!  After all, you don't actually pay for film anymore do you?

Besides, isn't Photography all about being creative?  Playing with your environment, the light, the setting, and your equipment?

Another tool in the shed or another crayon in the box.  It's just going to make us better at what we do.  Frankly, I'm enjoying it.
Posted by Bill at 10:05 AM