Four and a Half Years Later - M.E. DePalma Park

The South Florida environment that we know, tourists and most locals, is almost entirely artificial.

The green grass that grows as thick as a fine oriental rug under your feet needs fertilizer and constant watering.

Palm Trees that grow in long rows down the streets of our cities aren't from here.  Native Palms don't tend to be planted locally and are mostly shorter growing.  When the natives grow, it's because a bird has eaten the seed and dropped it somewhere and it will get pulled from the cultivated garden, just like I did an hour before now.

The point is that it's also easy to tell when you end up in a natural environment here.  You literally can hear it.  The sounds of life are loud and plentiful.

When the rapacious developers leave some land alone, it's because forward thinking municipalities have written into their codes that a certain area must be set aside as a preserve or a park.

Even Natural areas need care here because we've made such a mess of things.

When there was a property left over from a developer here in Wilton Manors too small to build anything on it, the City moved to take ownership in part to repair some of the damage done by that developer to native species.  This was to become a vest pocket park devoted to Natives.

I remember sitting at the dedication of the park in February 2010 on a lawn chair in the middle of NE 7th Avenue thinking that this will be beautiful when it grows in.  At that point, it was an open expanse of a few pre-existing slash pine trees and a lot of mulch.

The story of that day is better left to the original tellers at the East Side Neighbor's Association.

But it was created and cared for by M.E. DePalma, her friends and family, and the City of Wilton Manors.  It slowly grew to become an island of natural beauty.

I have the pleasure of walking past it almost every day.  The singing of birds, flocks of butterflies, and croaking of frogs is a constant companion to anyone who takes the time to walk to the back of that park and sit at the butterfly chair and commune with the place.

Even if you don't take the time, this is a place where Florida's wildlife has been allowed to return and it will visit you if you let it.  Just ask the little lizard that lives near the plinth who followed me around that day in September 2014.

But cared for it was.  In fact, I'm shocked just how beautiful the place has become over the years. 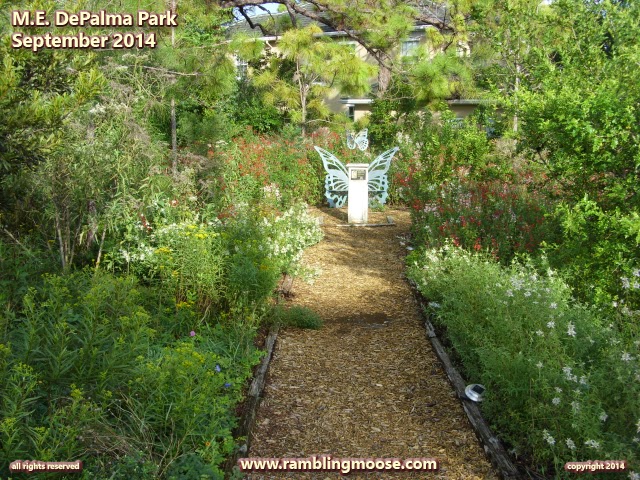 It has become a riot of colors.  Flowers beyond my own knowledge nod their heads in the sun.  Spider webs dance on the breezes.  A chorus of Tree Frogs chip their greetings.

This is a small reminder of the Florida that once was, and could be again.  In some areas, it has returned because some well educated people have allowed it.  Besides, it takes much less effort to allow Nature to reclaim what belongs than to force endless carpets of St. Augustine Grass to suck up the waters from the aquifers.

I am just fortunate enough to have this near me so that I can visit when I need to.
Posted by Bill at 9:50 AM