I step from the front door and see them.

They are new arrivals, crossing over one of the many bridges onto the Island City from neighboring towns.  Coming here within the last two years, they have pushed many of the other smaller lizards away.

More assertive, they don't tend to scramble away as fast as the Cuban Brown lizards, these are the Curly Tailed Lizards. 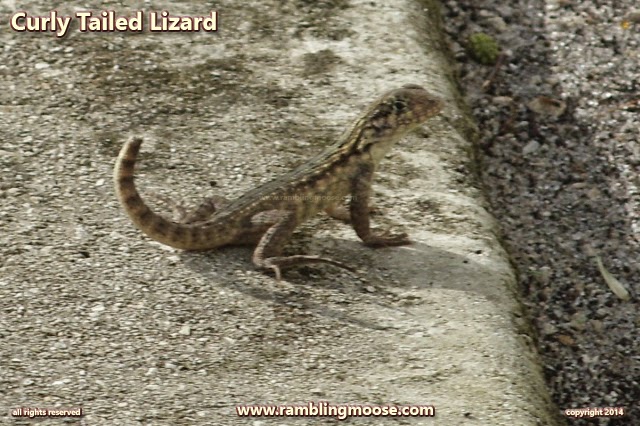 When the sun is up, they'll come out to bask on the driveway.  It's black, or at least it was in years gone by, more like a faded to charcoal grey.

I can step a few feet from the door and they begin to pay close attention.

Finally one of them gets startled and begins to run.  I am herding dinosaurs again.  They run off the pavement in formation.  Almost always running to the South, almost always in the same formation, running away to the grass and cover.

I lift one of the tiles near my side garden and there is one of them that I had herded before.  It thinks it owns the place, even if I do pay my half of the mortgage.  In a flash it is running to the nearby fence and the security of the neighbor's yard.

Every so often one of them is a bit more bold than the rest.   It will stand there, daring you to come closer.  It is as if it thinks it can scare 225 pounds of Moose away with its mighty jaw.

You are four inches long, more if you ever straighten that tail out, when you pay rent, you can decide where I go.

It tries to stare me down.

I reach into my pocket for the camera and squat lower.

The lizard is doing nothing.  No pushups as if to say I am the buffest reptile of them all so fear my mighty tail!

I fire off a second picture.

Not even a tail wag.

We're both bored of the encounter at the same time.  I do not speak Lizardeze well, and it is afraid of my mighty size 11 shoe.

It walks slowly off into the distance, and I head on my way.  Encounter has ended, herding will be left to the future.
Posted by Bill at 10:01 AM