I have to say, in my own experiences, the Gables Company have held true to their word.

When we heard that a defunct nursery in the heart of the Wilton Manors Central Business District, right smack dab in the middle of Wilton Drive, was going to be "redeveloped", we wondered what they were going to do with it and would it "Fit In".

We were told that they were going to make Wilton Manors home.

So far, everything I have seen, they have absolutely made Wilton Manors home.  No reservations.

I worked with the local staff in order to use some of their then un-rented commercial space as temporary gallery space for the Island City Art Walk.  They agreed and liked it so much that it was later used as temporary space for events such as the Stonewall Exhibit during the street festivals, space for civic and political functions, and I want to say some temporary commercial space - although don't quote me on that last one, I could be wrong.

All of the Wilton Drive spaces have finally been rented creating jobs and business opportunities for people here in the city.  There are one or two spots open on NE 21st Drive facing City Hall and Hagen Park, and it will be interesting to see who moves in there.  I've heard comments about one thing or another but nothing first hand, and I am looking forward to see what develops.

A while back they started working on the sidewalk.  It had developed stress cracks so they pulled up the concrete.  At the same time, they put up a large circular plinth.  We had fun speculating what would go there for a while.  When it all cured and the sidewalk was put back, it wasn't empty for long.   Some large decorative pots were placed on the spot.  It was obvious that it was temporary since LED lighting was there and some curious bolts had appeared.

Bolts.  You know, something you'd lash something to in a hurricane?   They were there for the Long Haul, nothing would rip them up.

Then it appeared.  A large art installation.  They were making their home more beautiful.  This was piece of four long tapered columns holding up a large sphere made of metal poles.  All in a deep rust colored finish, it appeared on the plinth, and was lit at night.  Really quite a nice display.

Of course I got involved.  I looked at it thinking there has to be a good angle to get a picture of it.

It taunted me.  Standing along the Drive, there was something in the way.  Either a trash can, the intersection, some part of the building that didn't quite fit.  I couldn't figure out just what was the angle.  The electricity wires just irked me and while I am good enough at Photoshop to 'shop them out, that wasn't the point.

I had a light bulb moment go off in my head.  How about inside? 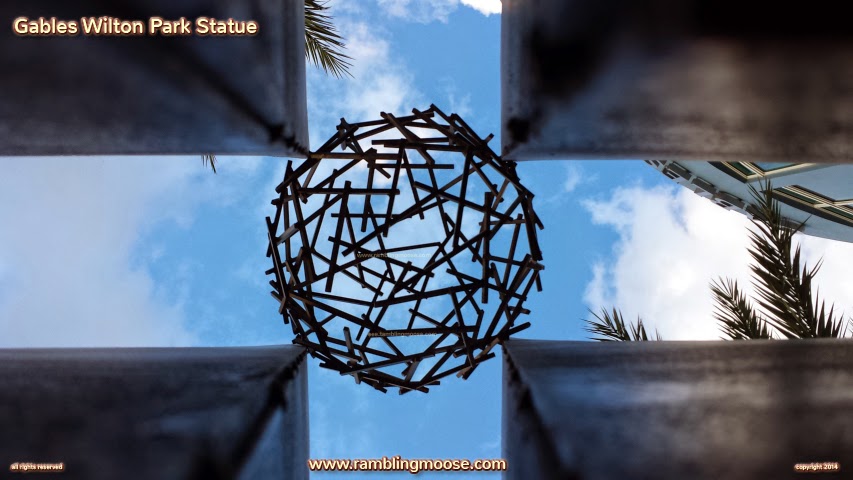 Yes.  It worked.  Having a rather good cellphone camera that is as thin as a magazine helped too.  I was able to put it on "Voice Shutter" and yell at it "Capture" as political candidates stood on the corner waving signs at traffic and gaining a few random voters.  I'm sure people were wondering why I was yelling at the statue, but they didn't ask.

It's not the kind of picture that you could do with a traditional camera.  The spaces inside are much too small to fit one.  It was just a matter of luck that my camera was thin enough to slide inside and I had the Voice Shutter on it.

But finally, I got my shot.  Now I can clear off those other 40 or 50 pictures that I took before my head cleared! 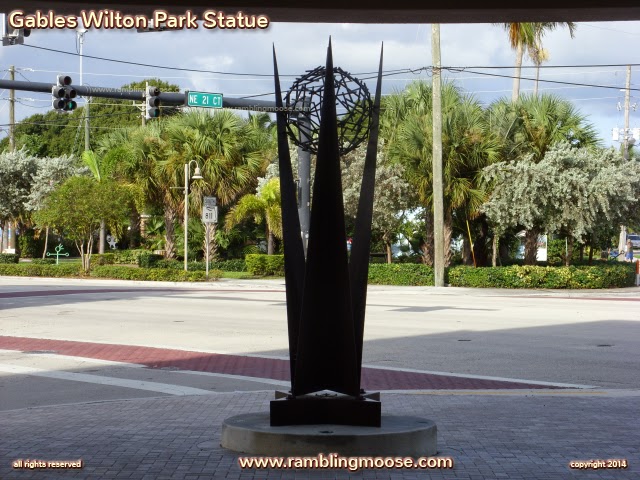