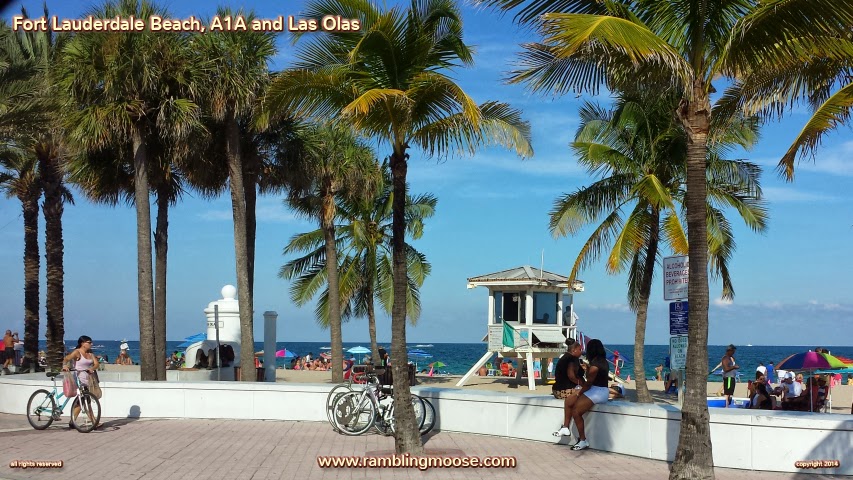 How about a ride!
In The Car!
Let's Take The Dog!

We were heading down to flip tapes at Kevin's office.  That meant we'd be stuck in traffic.

Since we were going to do it at least twice plus other ancillary voyages up and down our suburban pseudo urban sprawl that constitutes the Proposed State of South Florida, that means sitting in the car looking at the pretty scenery.

I have a love hate relationship with the beach at Fort Lauderdale.  It used to be The Strip until some small minded right wingers closed down the whole spring break scene sending it off to other places.  It was a huge draw and an economic engine for all of South Florida.

After that, the businesses closed at the beach one after another, then the Republican induced Great Recession hit, and the Beach isn't anything like it used to be.

One of my favorite memories was after driving 1206 miles from my home in Suburban Philadelphia to Fort Lauderdale, going to the beach and parking right about where this picture was taken from and enjoying the sun, surf, sand, and the party.

Two out of three ain't bad, and that's what they're saying here.  Granted, it is still off season, so the crowds are a little off and that is to be expected.

Going from The 17th Street Causeway to Sunrise isn't exactly an efficient drive.  You get stuck most days somewhere, whether you go up Federal, wait for a bridge on Andrews or NE 3rd, or simply take this route at the beach on A1A.

So, as I get lectured often, why not take the prettiest drive?

To be fair, I was driving the same route with Kevin one day.  He went via A1A, I went via Federal.  We got home within seconds of each other.

Everyone hates being wrong, but he is right, why not enjoy the scenery.

Besides, I'm not the only one enjoying the scene.  Lovers embracing, bikers walking, people taking pictures, lying about on the warm sand or frolicking in the surf.  All of that is what I saw when I was sitting there, two lanes away from the bike path waiting for that light to change.
Posted by Bill at 9:49 AM