Glory to the Hypnotoad on Kevin's SUV 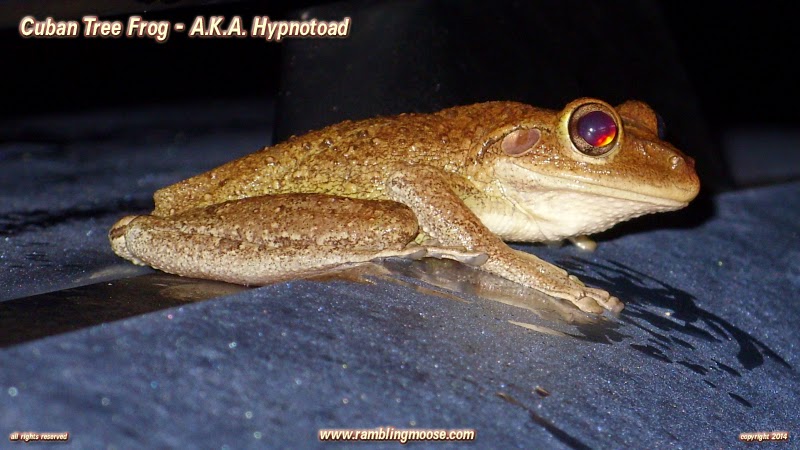 It also reminded me of a couple stories.

These tree frogs, or at least I think they're tree frogs, are common here.  In the case of this little creature, it's a Cuban Tree Frog, and classified as, you guessed it, an invasive species.

It isn't the first time I have seen them here, there's one that had been visiting me in the predawn morning hours by leaping onto the back window of the house with a meaty smack.  I guess if it could find itself 7 feet off the ground to get up onto the house, it certainly could jump up into the air and land on the back of a beast of a SUV at 6 feet.

On the other hand, I was told that shortly after we got here, one of them had leapt and perched on my leg one day.  I remember that as being a Cuban Brown Lizard rather than a frog, but it certainly makes for a point of discussion.

I was also reminded that this one could be getting even for my childhood hunts.  Back in Cherry Hill, NJ there was a spring that fed a small pond.  The pond had green frogs in it and when the frogs were plentiful, the kids would do what kids do.

We never really took it too far past that.  We'd catch the frogs, the frogs didn't really think either way about getting caught.  They'd look at you with their eyes wondering what was next and when they got bored, they'd jump off back into the pond.  There were plenty more where that came from.  When we were through with catching frogs, we'd have a bucket of them and we'd set them loose back into the pond and then go back to find something else to annoy.

Typical kids.   They do things and don't really know why.  It's just what we did.  Now that we're older we know that it's pointless and annoying and someone could get hurt.  Usually the frogs although it did get our clothes and shoes muddy.

For a while, one of my favorite TV shows was Futurama.  Set in a strange future where robots roamed the Earth along with Aliens, travel took place in pneumatic tubes in New New York.  New New York was built over top of our New York which was blasted in the opening scenes of the first episode.  Only mutants lived in New York below the current city.

I guess nothing really changed.

Of course there was a TV show within a TV show there.  One of the aliens was a toad that would hypnotize you with its stare and a groaning and grumbling sound.   That was the Hypnotoad.

Yeah, I guess you had to be there, but if you weren't, here you go!


All Glory To The Hypnotoad.
Posted by Bill at 9:19 AM