Have You Ever Felt Like You Stepped Into A Disney Movie? 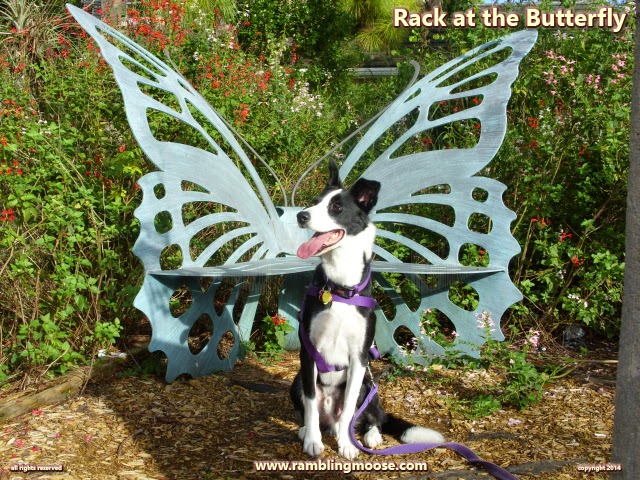 I got restless Sunday Morning.

I simply didn't want to sit in the chair doing "regular things" and got up from the computer.

Usually when I do that, I go into the kitchen and make something off the wall.   I could still do that, I have enough Butterscotch Icing to roll out and ice a cake.  More of those Krimpet tasting cakes that I love so much.

Rack was laying in my bedroom on his mat in a pool of sunlight.  I walked out to the main house and I'm sure he read my body language as if to say "Something's Up!" since he followed along.

Grabbing two "dog bags", the camera, and all the gear I would usually have when I take the dog for a walk with the camera, I thought I'd take a walk around town.  Nothing planned.  I had wanted to get to the park and get some shots before the sun got too high in the skies.  At that point, South Florida starts to look a bit Over-Exposed and the colors can wash out.

I didn't have to call Rack.  He was glued to my right calf muscle.

Dressing him up for a walk, he went to the front door.  I looked outside and stepped into Technicolor.  The riot of colors that is Florida assaulted the senses.

We both gathered our minds together, and begun the trip.  I dropped Rack's leash, on purpose, and gave him an Off Leash walk around town.

He spotted someone well down the block and didn't care for him.  Acting the fearful dog, he would follow behind me.  We put some distance between that person, who was completely harmless.  I know the guy and see him often since he walks through the neighborhood twice daily.

I turned down the block, camera in hand.

The first place I looked to take a picture was a fence.   The bird perched there watched me take my camera out, push the zoom button full and allowed me to take one picture.  Looking at the tiny view window afterwords, I had missed the shot.  Not to matter, the Cardinal flew off in a flash of red feathers.

I was disappointed but not for long.  There was a Curly Tailed Lizard watching me.  It allowed me to get rather close and squeeze off a few shots.  Dinosaur's great grandchild living on my block.  They almost never let you get anywhere near them, let alone close enough and long enough to take pictures.

As soon as I got enough, it darted away before I had even turned off the power.  It knew.

I was going to take another picture of a different Curly Tail and it knew I didn't need it.  It strolled away.  Not so much as a Curly Tail normally skitters away, but strolled.  Slowly ambled away.

Ok, Snow White, this is getting odd.  Very odd indeed.

At least the flowers didn't need any prompting and I managed to get a few of those.  Flash went off on one, disappointingly I got a second one that was actually natural light, clear and perfect.  What I needed but no more.

Head South on the street, the lizards were ambling away in great herds of raptor's children.  Not concerned of this giant approaching, they merely got out of the way of my size 11 feet.

We reached the park.  Rack was still close, now relaxed since the other guy went North a while back.  Off leash and enjoying the freedom of the walk, he went into the little vest pocket park and sniffed at the plinth.  Rack pointed out a Cuban Brown Lizard on the sunny side of the plinth at the tip of his nose.  Neither were concerned with the others presence.

Instead of harassing each other, Rack merely walked to the back of the park and sat down.  He was off a good distance from me, watching me take pictures of Spiders, Butterflies, Bees, and Lizards.  Flowers in a riot of color seemed to stop nodding in the ever present breezes when I needed them.  The Butterfly I wanted to get a picture of hovered, then landed on my finger on the shutter trigger of the camera.

Not terribly helpful, but quite amusing.  The Butterfly helped me notice that the Lizard was trying to get into the act.  When I spotted that, the Butterfly went behind the big copper Butterfly chair as if to say I was taking the wrong shot.

The Lizard slowly walked to the corner of the plinth.  Posing for me, it waited.  I readied the camera and he began doing some slow pushups and what passed for Cuban Brown Lizard Gymnastics.   The little guy really wanted its picture taken.

When I had gotten enough of those, it simply walked out of the sun and stayed in the shade as if to say go look at the dog.

Rack had decided to pose.  Sitting in front of the Butterfly, he was looking from side to side, enjoying the day.  No longer hyper-alert, he was relaxed and enjoying the scene.  I managed to get off some more shots, perfect for what I needed.  You guessed it, he decided I had enough and walked over to me.

He simply walked out of the park, sat at the end of the little walkway and beckoned me forward.

I was really beginning to expect Thumper and Flower to show up any minute.  Maybe Bambi would join me and I'd thank Snow White for taking me out this morning.

The entire rest of the walk was like this.  Rack stayed close, never really went very far.   I ignored the leash until I got home.  Removing the leash from his harness, I washed the road grit off and told him to go walk in the grass.  Our routine was to wash his feet before he goes inside, and this was no more different.

One last Disney Moment.  Rack did exactly what I asked him.  Off leash, he walked out into the grass, around the car, and down the other side as if I had been guiding him.  Never mind that I was on the porch and merely gave him that little instruction, he did it flawlessly.

I think the ending credits started to roll at that point.  I opened the door, Rack stepped into the cool dark interior and we left the Technicolor movie behind.