Intensity, Thy Name is Rack

Have you ever tried to take a picture of moving water knowing that it will never be the same river twice?

We really do not have one dog.  We have two.

There is the calm and quiet Rack that sleeps almost all day.  He is up with me, sometimes before, sometimes I have to coax him out of the warm donut that serves as his bed.  I hardly know he's home until a truck drives down the block, a door slams, or some other intrusion into his quiet canine life.  He will then rouse, and I hear something that I mistake for a motorcycle or a lawn mower in the distance.  That would sometimes go forward into a full yodeling bark but only when someone is on the property.

I know what's going on. Soon he will settle back into his reverie and fall asleep.  Some mental process looping in the background of his canine subconscious until the next intrusion triggers him to come awake.

The other dog appears later.   Once in a while we do have to go out.  That sends our boy into a sulk.  He'll go and hide in his crate, sleep in his bed, or under the chess table in the corner and go into standby mode.

When we come back, that is when the full on fur covered waggle will appear.  I've heard some say that it's bad manners to have your dog go crazy when you come home.  They don't get the point.  As long as they're not knocking you over and causing damage, that excitement is one of the reasons you get a dog.

Walk him out to the backyard and the fun truly begins.  The herding you around the coffee table to greet you back into his presence and to see if the pack is still intact was only the opening act.  Now the question is how much of that rested energy can be used at once.

We go to the door and slide it open with a rattle.  The wedding bells from my sister's wedding are hanging there on a long maroon cord announcing that we all are going outside.

Rack begins a trot to the hedges, does what he needs to and watches.

I kick a piece of bougainvillea back out of the way and Rack runs.   Not away as much as toward joy.  He's covering the yard in leaps and bounds.  A sinusoidal oscillation that covers distance in a bounce.  He's weaving to avoid something that only exists in his happiness.  Bouncing around the plant pots, leaping over the cutting pot that is holding some small treasures that someone wanted us to have, he's airborne.  Running the entire yard, he makes a detour to find out what the sound was in the next yard.

Purposely, one of us jumps, making a human attempt at the Lets Play sign that all dogs understand. 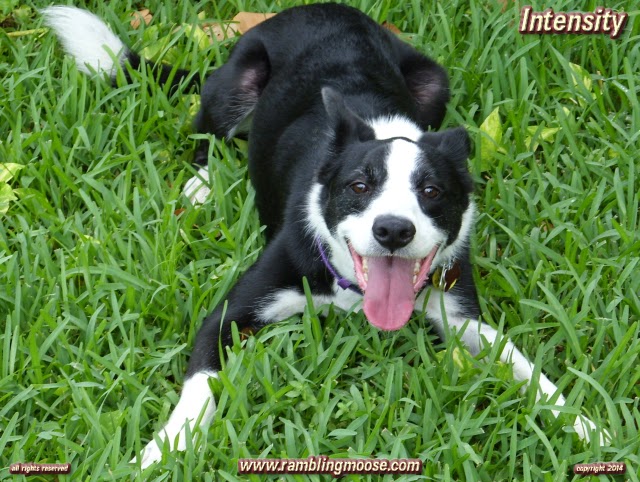 He's out of the hedges in a blur of black and white, running the perimeter in a frenzy of activity.  Behind the table, leaping over the pool gear and the furniture, he makes a switchback that seems otherworldly in its precision.  He has missed the concrete support of the table for the thousandth time, and runs back towards the direction he just came.

Into the hedges, back behind the shed, and out by the sea grape, you had better watch because he's coming right at you when he stops.  Assuming the position on the ground, he pants about 14 and a half times to cool down.

His eyes light up with a fire of excitement.

Leaping off the grass, he will run over to the sea grape and stop.  Looking to see if that was what we wanted, he'll launch into another circuit of the yard.  This time he flies over top of the small fountain that holds the pool filler down and cuts the corner out of the pool landing firmly on the ground.  Accelerating to full speed would be redundant in this small space, but he does.  Reaching the end of pool area, he squirts between the two bar chairs and around the other two to come back to almost exactly the same spot he was at when he started.

What would be the point of all of this you might ask yourself?   Ask him, we're having too much fun.

One more stomp and he looks to the side.  Another stomp and he launches for another circuit.  We notice he's slower on this circuit.  Instead of an explosion of power, it's a more measured draining.  The adrenalin is beginning to be burned down and this time when he returns it's to plop on my feet.

I don't think I had to move more than six feet.  He passed through a wormhole, visited a parallel dimension, fell out on to that world and orbited it.  Then he returned back through the wormhole and into the hedges.

It's a long trip for a dog.  Once around the world, and back, all in the space of one small South Florida yard.
Posted by Bill at 10:04 AM