Raspbian Gets a New Browser - Epiphany

I saw an posting on Raspberry Pi's Blog announcing that the team behind the default browser on many Linux distributions called "Web" was being brought to the Pi the other day.

Great.  It's an epiphany.  Ok, enough with that particular pun.

"epiphany-browser" is the name of the package itself.  "Web" is what it calls itself when you look at the about screen.  No matter what it's called, it's there and it is an improvement on the older Midori browser that was shipped with the version of Raspbian that I installed on my Pi.

Midori is a scaled down browser using the same underpinnings as Safari.  That's great for a limited memory computer but it was a bit too scaled down.

Epiphany will bring better HTML 5 support, a Javascript JIT "Just In Time" Compiler, as well as and most importantly to me, Hardware-accelerated Video Decoding.  It also will be the default browser in Raspbian in future installs.

It will result in a more robust experience.  Since I have basically "locked up" Midori with four tabs open, I'm looking forward to that.  On the other hand, I went to www.fullscreenweather.com and was able to get a radar map on Epiphany where Midori would have simply been too slow to use.

Just like anything in a Debian derived Linux Distribution, it's easy to get.  It is available via Synaptic, or you can install it from the command line as usual:

The whole install took about 15 minutes on my Pi.

The reason why it's called "epiphany-browser" and not just "epiphany", by the way, is that there's a game out there called epiphany which is a "boulderdash" clone. 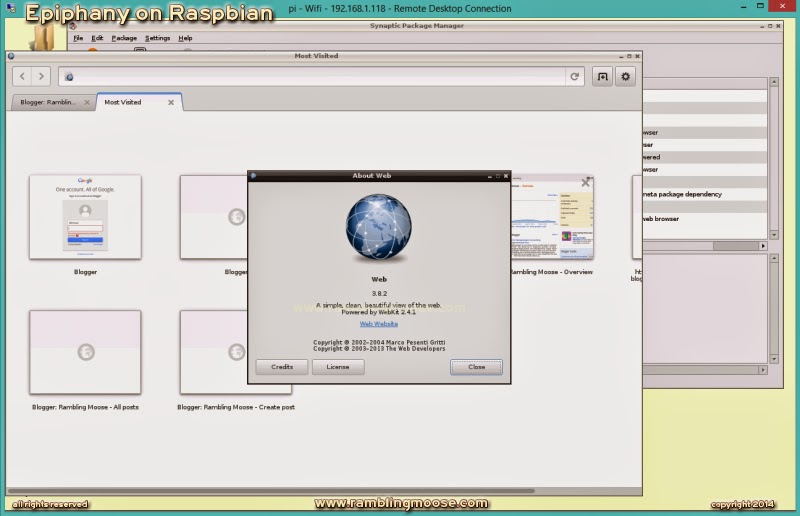