I have always liked what I'll call when I'm being charitable, swag.

You know, the junk that you get for free when you go to a trade show?  These days, now that the Republican Induced Recession is fading away, business is getting better.   That means we're getting better Swag.

My buddy up in Atlanta, Craig, went off for a visit to San Francisco.  For me that would be a trip of a lifetime, for Craig, he got to learn more about Virtualization and VMWare.  I can hold my own with some of the technology, but his knowledge on the subject is encyclopedic.   He handles a large server farm worth of virtual computer servers for a company up there and can quote you chapter and verse over a beer in a bar.

That's my test of knowledge, how coherent can you be when you're on your second beer on a subject.   Trust me, he knows his stuff.

About the second day of soaking in the Virtualization Goodness, I got a picture of the inside of his hotel room with the second bed covered in Swag.  Tshirts, flashlights, blinky things, a USB hub shaped like a little man, that sort of thing.

We were laughing about the oddball things he had gotten and I guess it struck a chord.   I have a few things from the Swag Collection, including that blue ball that caught my eye.  Having a pool helps with that thing, give it a smack and it blinks with a bright blue light.   A couple years back that quality of crap wouldn't be given out for free.  The last computer trade show I went to hardly had hard candy at the booths, and the booth babes were just starting to make an appearance in their midriff showing uniforms.

When I got that Box of Swag I opened it up piece by piece in the dining room.  Rack came over and started giving things a sniff.  I can always count on the curiosity of my McNab Dog to stick a wet nose in when something new shows up.  At the same time my own Oscar started chattering.

Oscar chattering is normal, having a parrot in the house means that you have to go out of your way to entertain them or else you will end up having a screeching mess.  You're not going to have a good time of it.  Step one, make sure that you have plenty of bird safe toys.  Un-destructable things that won't shatter when a strong beak grabs it and bites down, or when it hits the floor since both things will happen.

It also helps if they're not something that will scare Oscar.   I have a small beach ball that he hates.  I mean eye flashing growling hates.  He will peck at it until it bounces off that cage and into the dog.

The dog doesn't get it either.

When Oscar gets a bit too loud, the beach ball helps quiet him down as a result.

Putting junk on the cage helps him go and attack them instead of taking a chunk of beef out of my arm.  He'll spend time preening the ropes, chewing the fluff off of the tennis ball that is attached to the rattle, and shred the insides of the toilet paper tube instead of screaming at the music that almost always is playing here.

But he has a nemesis.  Anything ball shaped and larger than a plum is just too much.  That is why I was confused he was showing so much interest in the blue swag ball.

I placed the swag ball on top of the cage and I heard a little fear grunt as he backed off to the far corner.

I picked up the swag ball and turned it around in my hand letting the light catch it.

Oscar started to flash his eyes in curiosity so I set it back down.

Beak made contact and ... the ball rolled away only to come back and tap his beak lightly. 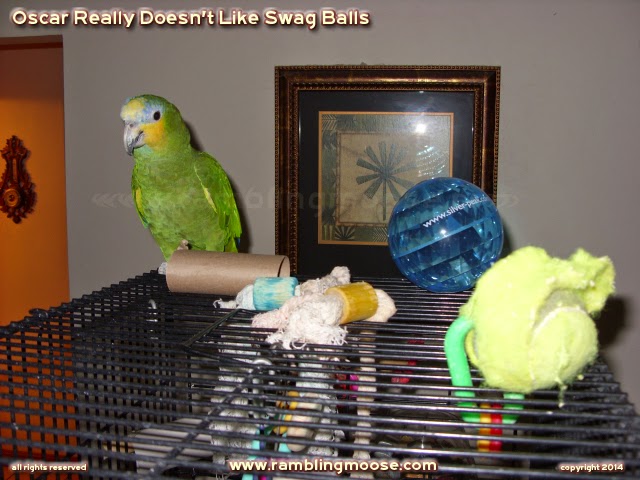 Flap wings and regain stability, the green bird went after it again.

Tap.  This time the ball rolled off the cage with a bounce or three on the floor.

It was blinking when I put it back on the cage.  Oscar never expected that as he dove for the door of this cage for safety.   Blinking stopped after about ten seconds and he came back out.

The Swag Ball is Evil and Must Be Banished.

Tap.  Not quite as forceful as before, plus I had it in a low spot where the toys roll to the center of the top of his metal wire room.

Parrots are exceedingly curious creatures.  They learn quickly.  They also don't like change.  I don't think that little walnut that passes for a brain can process why it rolled off the cage before but not now.

TAP!  The swag ball sat there.  TAPATAPATAP!   His dance school impression worked.  It rolled off the high spot and flew off the cage bouncing off the table and onto the floor.

Parroting in English Slang means to repeat something without understanding it.  In Oscar's Case, he parroted one of my own laughs at the ball as it hit the floor and rolled into the kitchen.  I swear this bird was laughing at the ball and at his success at banishing the evil thing in a triumph of Schadenfreude!

Luckily it was designed to hit the floor.  The ball is intact, the bird is happy, and we found a new routine.   After all, it does tend to quiet the little brat down for a while and he's interacting with me through the ball.

He's not brave enough to leave the cage on the room divider in the middle of my house.  I'm fine with that, especially that since I go absent minded from time to time and leave him out when I wander out into the great beyond of my yard in the middle of the South Florida Sprawl.   He feels safe there now that the Blue Swag Ball has been banished and is content to sit there, staring at me with red ringed eyes from the comfort of his home.