Don't Threaten Me or I Will Flash My Dewlap At You! 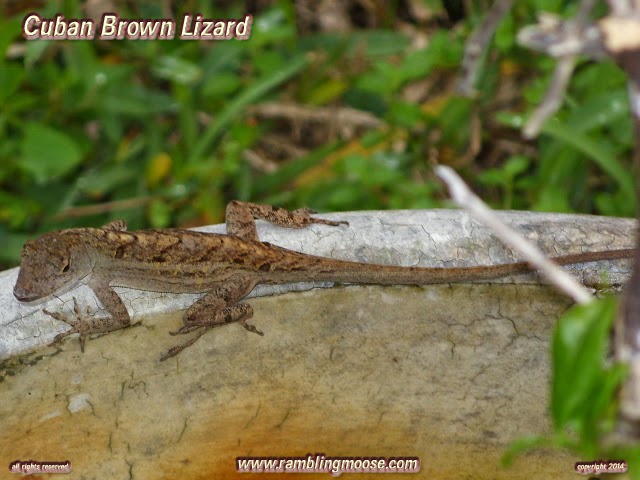 I can't say that these creatures were "here first".  Technically they were introduced and naturalized and pushed out some other lizards that were here before them.  It's a shame for those other lizards, but it is par for the course here in Overcast South Florida.

I've heard they are now being pushed out by the Curly Tails.  Curly Tailed Lizards which are twice as long and twice as thick and four times as assertive.

The Cuban Browns are entertaining to me.  Completely harmless, so much so that children would catch them and let them bite their earlobes to have Lizard Earrings for the few seconds that the scared creatures would hold on.

There you go little girl, have a chomp from my mighty toothless mouth as I wiggle my feet and flash my dewlap at you!  I am the fearless descendent of the great Dinosaurs and you shall respect me!

Not so much for my friend here.  I did my daily run around the backyard looking at my almost dead lemon tree in the pot line and pulling weeds from the mango tree.  Taking time to shamefully look at the banana tree that is so pot bound that the next time it falls over the pot may burst in relief and the tree will walk the two steps to the East saying "I'm Free! I can taste the sweet soil again after these horrible people kept me in prison!".

To which the Mango tree says "Try being me!  I'm over six foot tall and I fall over every time a shower comes through like a child's toy!".

We really do have to decide to create a small garden for these things.  Pots don't work.  You never get enough fruit, even though I was getting enough lemons for a while to make homemade lemon curd from them.  I'd have a chicken in the yard too if it weren't for that they're noisy and I'd get yelled at by code enforcement for having a farm in myback yard in the city!

Fresh Eggs anyone?  Maybe I need to move to Key West for that?  Conchs have all the fun!

Walking out into the yard is an experience.  You never know what you will scare off that is reptilian.  Most of what is back there is completely harmless, even the black racer snakes that keep the rodents away.  Live in harmony with nature and you will be better off for it.

Stepping onto the Lanai, I have to look.   Rack generally will follow me out the door then go off and sniff the air.  If there is a storm within 10 miles, he'll hear it and try to herd me back inside.  I'm too deaf or just plain human to hear those rumbles that are off shore between us and the Bahamas.  But he does and doesn't like them at all.

At the right time of day, the lizards are on the pool deck catching the morning sun.  Cold blooded creatures need to warm up just like that cup of tea you have.  They'll run away in great herds of lizards like Raptors in a movie after prey.  More likely they're just off to the grass so they don't get trodden on by great size 11 sneakers.

Having inspected the pot line, the irrigation, and considering where to put the Hibiscus that is in the pot that now has gone taller than I am by a few inches with that one red flower at the top which will wilt by tomorrow morning, I return to my friend the brown lizard.   It hasn't moved.  It's still watching me.

Goodbye Lizard.  Catch some mosquitoes while you are there.  There are plenty for you.
Posted by Bill at 9:33 AM