A Box of Holiday Cheer at 7:10 in the Morning

I did not really expect it.

Not the box, I was expecting the box to arrive.  It's a box of holiday themed goodies that came from my Sister, Pat, up in Cherry Hill, NJ.

We trade boxes each year, and they arrive welcomed.  This time I was expecting the box because when I told my sister to expect hers last week.  She said that one was coming this way and to keep an eye out for it.

It made its way down the coast to me. 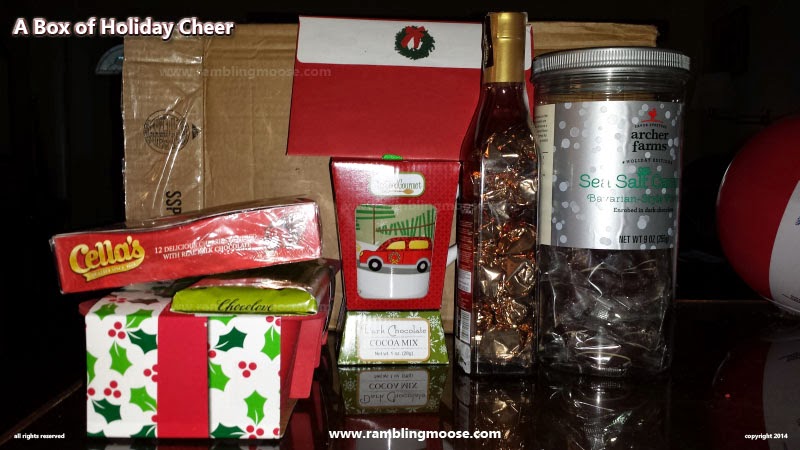 See the thing was I didn't expect it now.  I was just going around the house opening windows.  Florida in December can be beautiful.  Last week was a bit too chilly for my blood to open the windows before dawn.  Since I am up as early as 5AM on a regular basis, I see the temperatures.  They were as cold as the mid 40s one day, and since we have windows that don't hold anything in, heat or cold, they stayed firmly shut.

Today was the first day that I have thought it was the right temperature before dawn to open the windows.  It was 66 at half five when I walked Rack for his daily march around town, and true to form for a Floridian, I had on a sweatshirt.

Yeah, go ahead and laugh, we don't retain the ability to go out in the cold weather like we did before we moved here.  So go button yourself up in survival gear and try to convince the car it needs to start when you're in Sub Zero Temperatures.  I'll keep my sweatshirt handy when its in the 60s.

Checking to see if my "pet" tree frogs have made it to their nook in the back of the house before I open the windows, I get half of the house open when I hear Rack start to grumble.

Being the smart dog that he is, he stopped growling.  That is about all he'll do.  Growl.  Well, really, growl and then hide.

I looked up at the front window from the back of the house and saw the back end of the mail carrier's truck.

I walked to the front door since I didn't want Rack to prove me wrong by barking like a lesser dog, and opened it.

The Postman was indeed making a delivery at this crazy hour.  I guess it's due to the holiday rush.

I looked at the box and said "Wow!  It's even for me!", stupidly not realizing how that sounded, and thanked him with "Oooh! It's Cookies!" and went back inside.

Yeah, ok, I didn't mean it that way, and I hope that the postman realizes I didn't but I can't fix that now.

More than anything else I was surprised to have a visitor this early in the day.  With Cookies!

Well, not exactly cookies, but some sweets and a rather cool silicone loaf pan with cake mix in it.  I've been wanting a silicone bread/cake pan since I started using them for cupcakes and cakes before.  I haven't broken down and bought the things because my cabinets are chock full of pans and gadgets from my old house in Philly plus the ones we bought here.

Now if I could just stop munching on this stuff and get started with my day!
Posted by Bill at 9:31 AM