Lizard, Guardian of the Rescue Pot 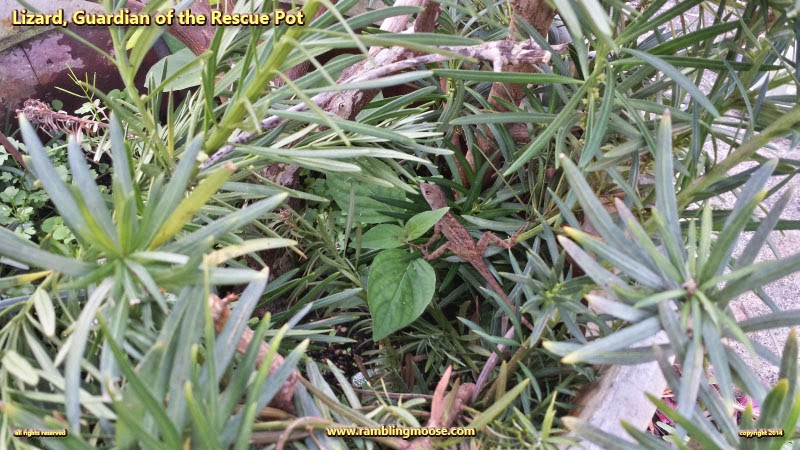 I went a bit nutty in the yard, but I didn't realize I was creating a habitat for lost dinosaurs.

The original use of the pots was to put what a snowbird thinks is appropriate for Florida.

Lets see... the Lemons all died, the Orange got replanted in the front yard and is moping along.

The Banana tree is still there but it's so pot bound that the pot will split any day.  If it doesn't I may help it to.

(Did I say that in my outside voice?)

My Mango tree is happy, although it's a bit pot bound and in a stiff breeze it will topple over.  Since the winds come off the ocean rather steadily here, that's at least a twice weekly occurrence.

The Hibiscus likes the pots too much and overgrows everything.

I ended up pulling out all the dead plants and ended up with three pots.  I put milkweed in one for my pet Monarch Butterflies who eat them down to a stick.

The other two are my Rescue Pots.  Lisa's Pentas are in one, the other have a collection of cuttings.  Darwinian gardening rules states that what survives will get planted.

The ruellias that I put in there in a clump are half-and-half alive.  Who knows about them.

They both have at least a bit of Podocarpus, Japanese Yew to the rest of us.

One is thick with it.  I figure some of it may indeed root.

I didn't count on them becoming wildlife reserves on a small scale.

Every time I go out there, my friendly lizards spot me.  They don't tend to run off, although there is a story with that.

Last weekend, I had to repot my Orchids.  Four pots, three of which had gotten too weak to survive.  Some were encrusted with mold and lichen, others with ferns.  It was hard to know where the orchids actually were.  One had no potting bark in them, and when I reached up to grab it, the pot fell apart in my hands.

They're basically popsicle sticks held together with wire in a square.

Two of them got a bed of Spanish Moss to hold the bark in and got rehung on the drip feed irrigation lines.

That third one.  I was walking back to the bar to repot my last one.  As I walk past the trees, I am pulling things out of them that didn't belong.  It was a cool morning, me flicking odd pieces of bark out at the pot chain, and I grab what I thought was a stick.

It wasn't.  It was a lizard's tail.  I pulled on it and out came a lizard from between the slats of the pot.  It didn't release its tail, but in shock, I did.  Since the concrete was warm, it trotted away quickly.

The things you find when you're out working in the yard!

So do think of the Lizards when you're out there.  They hide everywhere!
Posted by Bill at 9:34 AM