When you're in a colder climate you have a cold frame.

They always looked to me as if it were a window into the dirt.  A small box with a glass window on top where you plant your next year's garden underneath.  The extra warmth would give slow growers time to get started before the season officially starts for them in March or April.

Bell Peppers were always the ones I'd hear about from Mrs Alderfer when I was growing up.  I never liked the green ones but we have to buy extra Red Bell Peppers here whenever a recipe calls for them because  the snack monster attacks them.

Since I am an indifferent gardener and not really that good at keeping things growing in pots for long periods of time, I have a different approach.  The original blush of gardening has mostly faded.  The row of fruit trees and flowers in the pots that we bought when we first moved here have either gotten too leggy, overly potbound and need to be placed in the actual soil, or just gave up and died.

Instead of having a row of pots with nothing in them but weeds, why not put them to use.  But what to do?

The theory of "If a Seed Falls, It Shall Grow" is all over my yard.  I'm constantly using a weed eater to kill off dozens of palm tree seedlings because they not only grow in the garden, but in the mulch under the trees.

The pots gathered a healthy coating of seedlings at one point and one particular palm tree grew so large so quickly that it's now in the "island" in front of my house.  A year or so later, it's taller than the Bottlebrush tree that is threatening to die that it is next to.

I decided to turn these pots into a rescue.  We don't need a cold frame here, it doesn't get below 34F.  Just stick cuttings in the very wet soil and see what happens.

Everything I stick in these pots takes.

I don't necessarily have a green thumb, I'm just lucky.

What happened was I noticed that Lisa's Pentas had begun to die back.  I mistakenly put a green Spider plant in there and it overgrew the pot.  There's more Spider than Penta.  Reaching into the pot, some of the Penta snapped off.   I stuck it into the Rescue Pot and thought it's up to you.

It liked it and grew. 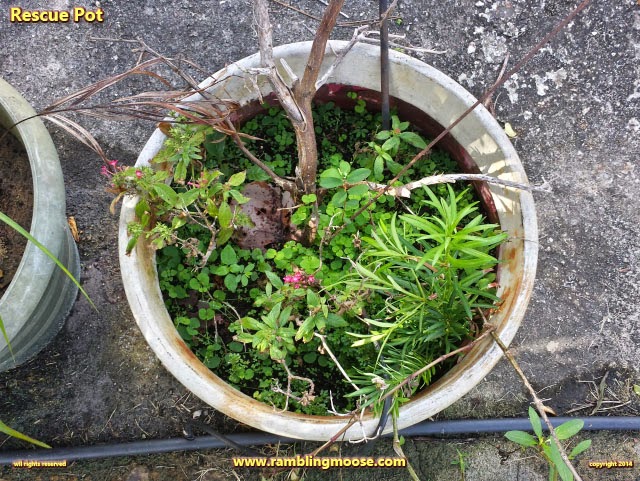 When I finally got off my lazy butt and went at the hedges, I whacked back the Podocarpus to a more manageable size.  Grabbing a cutting, it went in there too.

It is taking as well.  This pot is a month afterwords.

This is also pot 1 of 5.  I ripped out the Hibiscus that was in a rescue pot that had liked it so well back there it grew through the pot and into the soil underneath.

Successful yes, but a bit much.

The same landscaping trip saw me hacking two feet off the top of the Night Blooming Jasmine.  Taking some of the fresher cuttings of new growth, I stuck a row of cuttings where the Hibiscus once bloomed.  It now has a row of these plants, tightly packed.  I figure they'll soak up the drip feed water from my Orchids and eventually grow into something that will need some more landscaping.

It's the Circle of Gardening.  You cut, plant, root, grow, and eventually repeat.

Why not?  If you like what you have, simply fill in with more.  Not every cutting will take, but if you get one in three you're golden.

I'm getting 9 in 10 for now.  Luckily, I have some spots in the hedge that need filling in.  I can see through to the neighbor's yard and if I can see in, so can they.

Better cover up next time we're outside in the pool!
Posted by Bill at 9:54 AM