When you move your traditions to other places, sometimes they don't quite get translated well.

The European Pagan tradition of decorating a pine tree with sparkly bits and pieces of fruit got moved indoors in the early Modern Period.  People started fires with their trees when they added candles to them, and with electricity we got those big C7 and C9 light bulbs that would trip a circuit breaker these days.

9 watts per bulb.  100 bulbs per string.  Add a couple strings together and you'd have enough power drained to run my entire house these days when the A/C isn't on in February for that one week it's actually COLD here.

Luckily we've got LEDs now.  I have a table top tree that got decorated with a string of about 10 white LEDs that runs off of batteries for a couple of weeks at a time.

But move that same tradition to the tropics and frankly Pine Trees are a bit thin on the ground.  The Norfolk Pines we have here are a bit too large to cart inside, and the ones that aren't will be soon enough.

So outdoor displays here put to use what we have here in abundance in South Florida.

Now, look at them critically for a moment.  They look like a broom or a bottle brush you used to clean out the jars before you reused them for canning.  A mop of fronds at the top and a long tall empty trunk.  Not much shade when you stand under them.

In fact, I find myself standing on the North side of the trunk more often than not to catch shade before the light changes.

But there are some holiday decorations that work well with these beasts.  They can be really quite cheery when done right.

Wrap the trunk with a long string of lights and you end up with a barber pole.  Most people stop there and call it done.   There's a rather nice row of them here in Wilton Manors in front of "The Gables".

That's Gables Wilton Park to give it its official name.

A row of about 12 to 15 palms of about 15 to 20 feet are growing along Wilton Drive.  They're wrapped in pure white LEDs.  If you stand in just the right spot you get an interesting picket fence effect of glowy goodness.

But they did what is probably my favorite decoration.   On the corner of Wilton Drive and NE 21st Street there are a pair of Date palms.  You know, the edible things that we all like that have to dry and cure for their sweetness?

They wrapped the trunk like a pure white barber pole then ran the lights out on the fronds.  Now at night in the pure dark the fronds sway lightly in the breezes coated in light.  Makes for an interesting effect, I'll say.

It can't have been easy.  The fronds on a Date palm are very stiff and covered with spikes.  They're a good 10 to 15 feet long so the spikes can be more than six inches at the base, and since that is all standing parallel to the ground, they can most likely be used for lumber instead of thatch.

Yes, it's a sturdy plant.  You can actually catch some shade under it.

But if you stand under it and look up you see a starburst of fronds.  Line that starburst and you end up with a rather nice fireworks display that doesn't go away with an "Oooh!" in a breath or two of time. 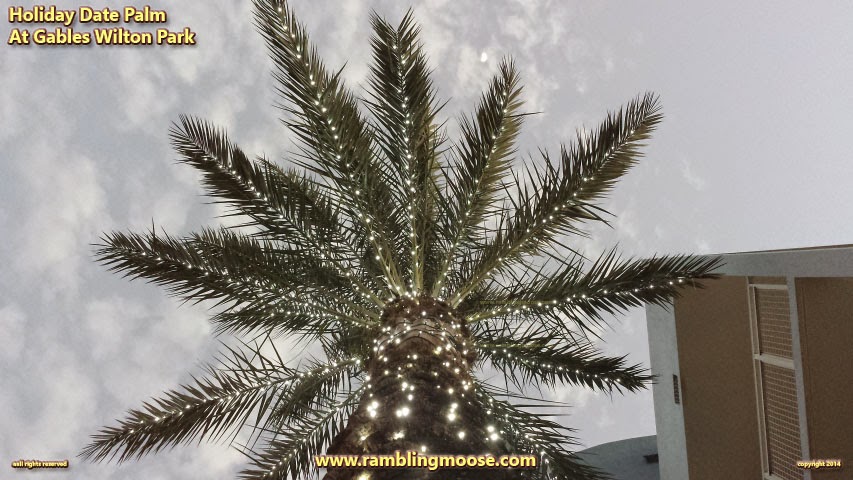 Luckily I get to see this in all sorts of times.  Early walk in pitch darkness, or in the sunset hour.  Either way, it's a welcome addition.