57 Miles For A Watermelon?

I wasn't thinking of produce that day.

It actually was something new.  We were going to a "hamfest and flea market" down in Coral Gables.  That of course set off a chain of events because of what I call "Suburban Inertia".

Yes, Science Content.  You expected anything less from me?

Suburban Inertia is the theory that once you move your body into the car and get going, you may as well keep going until you get all your errands done, or run out of interest.

Cash, Time, Interest, Need for a Rest Stop... all that qualifies.

We got out of the house at 7ish.  About a quarter after 7 if I misremember right.  Got into the big blue beast because my Jeep eats gas and I hardly ever drive it.

No, really.  I was asked by a neighbor if it worked since I use it so infrequently.  Yes, I do, and Yes, I still enjoy driving it.

We were heading to the University of Miami main campus in Coral Gables to hit a quarterly Hamfest and Flea Market.  I figured it would be fun, if nothing else, to go there and look for electronic fiddly bits.

Fiddly Bits is a serious technical term for small items that are necessary for life.  The little things that go together to make life itself possible.  You know, that one screw that fell out of the bottom of the case you were fixing and now the door hangs crooked?  It ticks you off to no end because you can't find the little thing because it rolled under the refrigerator after you kneeled on it when you got on the floor to find it in the first place?  It stuck to your jeans and bounced off and rolled under there and you can't be bothered to go after it because you'll have to move the pantry and clean the damn thing?

Yeah that kind of fiddly bit.

I was actually hoping to find some "bell" wire to make an antenna and figured something calling itself a hamfest would be chock full of "cool stuff" as well as fiddly bits.

I was thinking of maybe the 1990s.  That sort of flea market was massive back then where you could go and buy one part and walk through hundreds of tables entertaining yourself with the question "What the heck is that thing" and getting back an idea that convinced you that you needed it to repair that old tool sitting in the shed so you really can get that chore off the honey-do list that's been there since the turn of the millennium.

Come on, we all have one or two of those chores!

The hamfest was modest.  Fun but modest.  Only about 20 tables.  It did have a vendor with Vacuum Tubes, so I'll go again.  After all, Dad's Radio could use a tune up!

We were through in under 15 minutes.  Walked through again a third time and decided to go.  I didn't exactly want to go back so I suggested that we go down to "That scruffy farmer's market down near Homestead" and poke around.

After getting the "Are You Nuts" look, we started heading back to the main road.  By the time we got there, I heard from the Driver's Seat "Yeah that would be fun, lets go look around for that place".

Mind you, we had stumbled across it once on the way to the upper keys.  It was an insane crush of people then and we thought it would be fun to wander around it just because.

When we got there it was just as much of a crush of people on a Saturday morning.  It also felt like home.

I used to entertain myself going to this exact sort of place all over South Jersey and later in Pennsylvania.  They're all a little rough around the edges, but you can find things you can't find anywhere else.

Apparently "real" seeded watermelons are one of those things.  I mean, really?  All season I could only find those vile tasteless un-seeded watermelons.  For years I couldn't find a "Real Watermelon".  The deep pink to red flesh that tasted sweet and eventually would drip down your chin or your arm with a sticky watery juice.

The un-seeded varieties didn't taste like that.   May as well eat the rinds.  Blah.  Can't have seeds?  Too damn bad because you never ate the real thing.

It's a Jersey Tradition around the Fourth of July to stand in the backyard eating a wedge of watermelon and ending up with the seeds trying to take root in the garden because one of the kids spit them there.

Kids being anyone, even adults.

Everyone enjoyed them because they were good.  Not that over priced basketball sized thing that they sell now.  These would take up the entire bottom shelf of the refrigerator and promise goodness.

That was the first thing I saw - a monster watermelon.  So I mentally made a mark in my mental checklist to stop back and grab one when we went exploring.

Never really found anything else I needed.  Wanted, yes, but needed?  Nope.

Heading back to the fruit stand I grabbed the largest watermelon and immediately was warned "They have seeds!".

Yes, that's the point! That's how you want them!

I also grabbed a couple oranges, apples, a large sweet potato, and a few lemons and really REALLY looked forward to that watermelon.

Getting home I checked calorie count and figured a "candy bar" ration of calories would be 24 ounces of the thing.

Yes, A Bowl Full turned into a "Salad Bowl" full of a pound and a half of Watermelon. 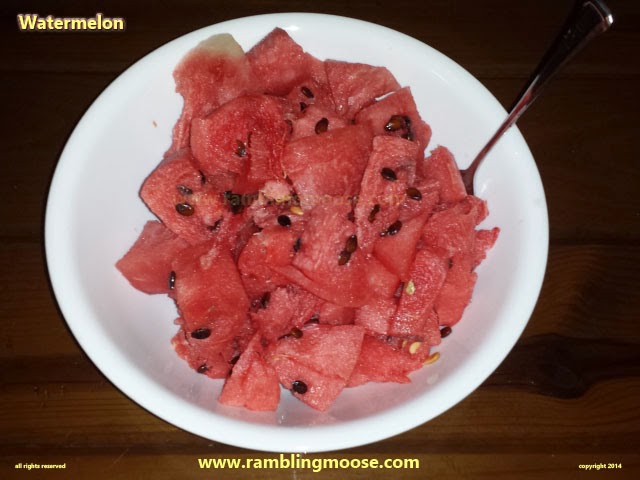 Frankly, for an ex-Jersey Boy like me, that's par for the course.

And BOY did I enjoy that.  The wall of sweet, the juice stuck in my Movember Beard, the seeds to discretely spit out into the bowl.  It all put a big smile on my face.

Then I realized.  Movember, er, November.  We're way out of season.  Where would I get another?  How far was that again?

Yes, we drove 57 miles for a Watermelon and some other assorted fruit and veg because I just couldn't find it in any of the "normal" places.

Would I do it again?  Sure.  Just not every damn week.  After all, there has to be somewhere closer I can get them.

I know of this little fruit stand on Dixie Highway up in Oakland Park...

I'm already plotting a trip out for next weekend when the Suburban Inertia strikes!
Posted by Bill at 9:51 AM