Cashew, Coleus, and Caterpillar by the Pool

They tell me that the wet season is ending but with El Nino firmly in effect, that may be overruled for a bit.

As a result, bright sunny days are a little more scarce than might be needed.

When they happen, you escape outside, pull weeds, and get chores done that have been waiting for the rains to stop.  On the other hand, it's better to do all that when it there is a grey sky than when the sun is beating down on you.

Either way, I still end up pulling great long roots of Virginia Creeper from one side of the yard to the other.  Blasted things are invasive and stealthy.  You start pulling at one side of the property and by the time you're done you have a coil of 50 feet worth of brown root that looks like an extension cord with a leaf here and there that taunts you.

Why?  Because there's a snapped end that tells you that the root merely broke off and it will continue growing where you left it.

Virginia Creeper is the Two Year Old of the Garden.  It's there telling you "NO!" when you're saying "GO AWAY!".

But it isn't all sweat and toil out there.  I have my chain of pots.  They started out as a place to put trophy plants that I wanted because I'm in the tropics-adjacent South Florida and everyone here should have a proper citrus tree at one point or another.

I'm also not that good at keeping them alive.  The original crop of citrus trees died back, but I still have my banana and my mango trees.

When the lemons died off, but the pots and the drip-feed irrigation remained.

Ever practical, I started using them as "starter pots".  Where I will put these weeds I can't say, but they are there soldiering on!

Instead of that Meyer Lemon that I was making Lemon curd from, I now have a weird collection of plants.  I specifically went out that morning to tend to the weirdness.  The first pot that I started planting weird in was that sad lemon pot.  Of course I needed somewhere to put my Mexican Milkweed so it went in there. 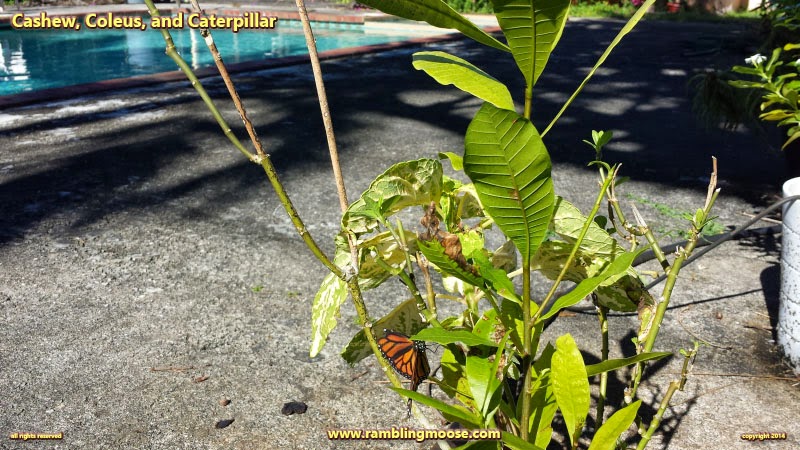 That didn't work.  The Monarchs use it as a salad and a way station for a quick stop before floating on their way.  "Oh well, that's why it was there!"

But the pot looked bare by itself with just a stick of eaten Milkweed, so I added some other things.  My Cashew tree.  The neighbor gave me a fruit, that I ate, and I dropped the seed in that same pot.  The tree needs to be moved since it got knee high and stopped.  On the wind there must have been a stray coleus seed because it too decided to land in that pot.

I now have a small ecosystem.  When the caterpillars allow, there are Mexican Milkweeds, but only until the leaves get out.  They never get as far as flowering, and forget about harvesting seeds, because one doesn't share with insects, even beautiful ones.  You'll have sticks, and you'll like it.

The Cashew tree and the Coleus will end up elsewhere when I start over.

But walking around looking at this decidedly unartistic collection of plants, I noticed a thread.

Getting closer, I noticed that the thread was a tiny day or two old Monarch caterpillar already eating the leaves that were trying to grow on on what passes for the plant.

Silly creatures you're eating yourselves out of house and home!

Of course the circle of life and all that went through my mind as I watched a female Monarch float in, land, and promptly lay an egg on that same plant.

Anyone want to bet whether the egg will hatch or it will be eaten in a day or three by that hungry caterpillar?

The things you see out by the garden when you're out procrastinating, er, pulling weeds.
Posted by Bill at 9:50 AM