Rosebuds Against The Sky

I spend a lot of time out in the backyard.  That's normal here, especially in Winter when the highs may be as cool as the mid 70s.

I take Rack, my dog, out back and watch him.  If he wants to play, he makes it quite obvious.  If I am being particularly dense, he even assumes the down on the haunches dog "PLAY!" form.

This wasn't one of those days.  I had to putter.  It was also just a little bit after sunrise so the skies hadn't turned their brilliant blue yet.

Wandering around the semi-private areas, I inspected the pool.  It hadn't rained in weeks but the water level was fine.

The hedges had been trimmed a few weeks back, so I didn't need to putter there, although the one hedge is somewhat of a mess.  You may like Mother in Law Tongues in a pot, but growing under a Night Blooming Jasmine Hedge, they can be an invasive nuisance.

I'd send some to my sister but she'd probably clobber me.  Never tick off a Jersey girl.

Thankfully I learned that some time in my early 30s.  Missed opportunities before that I guess.

I have a Darwinian approach to gardening.  Things grow, I cultivate.  Things die back, I clear and plant fresh.  I'm not terribly effective at that, other than Screw Palms and Dracena.  They're all over my yard, and terribly easy to grow even up North in a pot in a sunny room.

But then there are the roses.  People write sonnets, poems, and songs about the wonders of a rose. 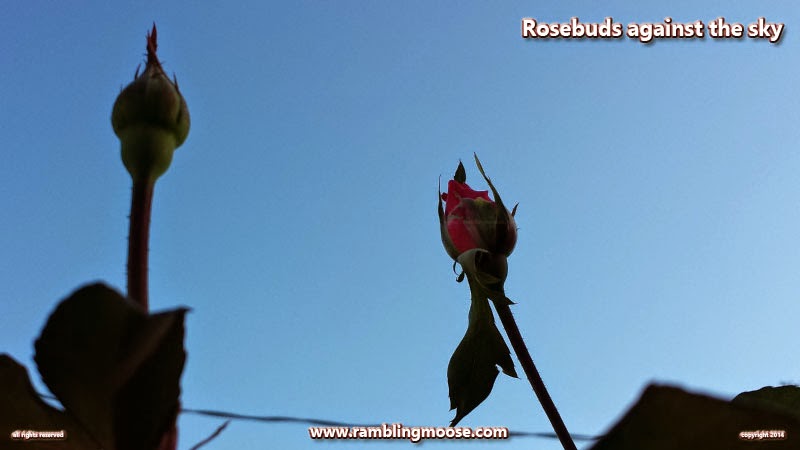 I'm not exactly a fan.  They're less annoying than my bougainvillea because they don't spread.

But I can't pull them out either.  I may cut them back, but I won't kill them.

I have one leggy plant in the yard.  A Pink Rose.  I won't call it a bush, it's more like a stick with some prickles on it and some limbs.  Lately I will let them get a flower on the end, then I will cut that off and bring it inside and have it indoors.

That is where they belong.  Cut in a glass in my kitchen.

When they finally wilt or drop petals, I collect them and put them in a coffee mug.  Pour boiling water over them, I get a mild scent of rose petals in the kitchen to do battle with the curry or garlic or other spices I was cooking with.

I'll get the plant cut down to a useable size eventually.  They won't grow through the fence like my neighbor in Philadelphia, Ruth.  Ruth is gone now, well, really, so am I since I am down here.  She was a powerful woman.  Small of stature, she had a presence that demanded attention.

She also had what we called Little Wellfleet next door.

Ruth had taken trips up there to Cape Cod and brought back plants for her garden.  One of them was right up against our fence.  Her "Wood Roses".  At least that was what I'd call them when I was being polite.  These were the kind of roses that grew wild up there.  They also would have made a formidable fence for livestock because every square inch of that plant had dozens of thorns on them.  It looked like a hedge crossed with a medieval torture device.  It also insisted on growing through the fence.   Since it was planted next to where my Jeeps were parked, it also managed to get me on a regular basis.

So while I respected and liked Ruth, I also got to trim her rose bushes on a regular basis.

While she wasn't looking.  I wasn't crazy.  I wanted the job done, not to have to answer why.

Now Wood Roses would grow wild.  That was what they did.  You could try to train them, but if you were in their climate, they would not stay trained long.  They'd grow thick and form large mounds of prickles and thorns and flowers.

Every time I manage to cut a flower to take inside the house, and stick my thumb with one of those prickles, I think of Ruth and her wall of Wood Roses.

Blasted prickly plants, beautiful though they are.  Just like Ruth.
Posted by Bill at 9:27 AM