A Cashew Tree Is Born 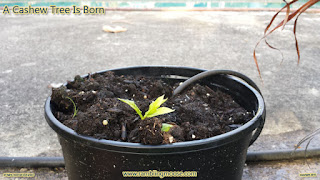 We have been through this once before.

We tried it last year and I guess I am the cause of it failing.

You see, all these pots in the backyard by the pool are there for a reason.  I propagate "interesting" plants so that they can go into the gardens.

Anyone with the right conditions can do it, anyone with a green thumb has at least thought of it.

With all the three irrigation zones we've got, it makes it easy.  Put a pot out there on Zone 3, where it will get a daily gallon of water delivered directly to the roots without any extra  help from me.  Stick a seed in the pot.  Step away from the pot. 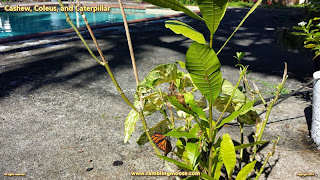 We did that last year.  Then I got started putting other things with it.

You see, a baby cashew tree does not like having its roots disturbed.

It was joined by Japanese Yew.  Some of the Japanese Yew took root and it's doing well in the hedges on the other side of the yard.

Where a little is good, a lot is better, right?  I stuck so much Japanese Yew in that pot that it was hard to find the cashew tree.

It gave up.  "You win" and dropped its leaves.   I babied the stick that was left and a few leaves came back, then it gave up again.

This May when the Cashew Fruiting Season happened, we got three more cashew fruits.  They're an 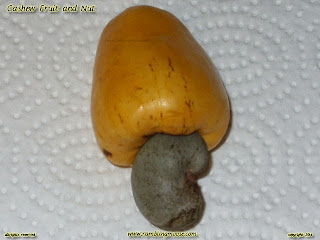 interesting thing.  Orange or Yellow when ripe, they have a clean and almost astringent flavor to them.  The seed is on the bottom, and that is what we all recognize as those wonderful Cashew Nuts that we pay a premium for.  Cashews are expensive, relatively, because they need some special handling to get rid of the poisonous outside skins.

After all, the cashew nut grows for the benefit of the plant, not mankind.

So who knows what the cashew will bring, but it has started to toll for me.

Well, not me specifically, but I'm sure we'll find a place for it in the yard if I don't kill it with kindness.
Posted by Bill at 9:14 AM