Lemon Meringue Pie With A Tasty And Angry Recipe

Did you ever get started doing something and found yourself herded into a completely different direction? 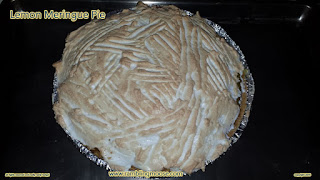 I did because I was stubborn.  Bound and determined to make "something good" for dessert that night, I started while I was making Mango Jam and was frustrated at each step.

First thing was I had my face stuffed in the fridge.  I spotted what I was looking for, Key Lime juice.  I knew that there were no Key Limes in the house, the little golf ball sized things had rolled off into the sunset a long time ago so there would be no "Zest" in the pie.

That's a secret ingredient they don't tell you.  If you don't "Zest" your fruit, your citrus pie recipes won't be as complex tasting.  Its a small thing, only a half to a teaspoon per pie or less, but it really does add a LOT to the taste.

So I pulled the bottle and noticed that it was more than six months out of date.  Giving the bottle a shake, I opened it up and saw some weird looking slick on top.  The juice was tan leaning toward brown.  No thanks, I'll pour this one out.

The other bottle was the same, and there was a strange vacuum pressure thing going on.  Bad.

Pour out 1/2 cup into a measuring cup and slide that into the refrigerator.

Next, find the sweetened condensed milk.

After 15 minutes of tearing the place apart, I gave up.  No sweetened condensed milk.  I had used it up making Dulce De Leche, or Caramel Sauce.  Good stuff, Explosively good actually.

I went hunting for a recipe that needed no sweetened condensed milk, and I was not going to go out to the supermarket "Just For This".

Annoyed at myself, I found a great recipe that I adapted to use.

There are actually two separate recipes.

One warning though, if you are making meringue, don't do it on a rainy day.  The meringue will sweat and get "goopy".  Nobody wants a sweaty goopy meringue.  This is best done on a sunny day in a dry house.


Using a whisk if you are into punishing yourself, or a stand mixer, beat the mixture to stiff peaks.
You will know when you have stiff peaks when you can fluff up a bit of the meringue and it will stay fluffed.

Note, if you want more Meringue, add egg whites and sugar at 1/4 cup confectioner's sugar to each egg white.  It will scale up, but don't go below 2 eggs.

Store the meringue in the refrigerator until ready, but it will deflate if it has been left too long.

Fourth - Bake the pie at 350 for 8-12 minutes or until the Meringue begins to toast golden brown.
Allow the pie to cool and set in the refrigerator until ready to serve.
Posted by Bill at 9:48 AM