Attitude from a Parrot 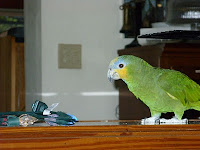 Oscar has been with me since 1986.  The thing with a parrot is that they're amazing creatures.   A person who thinks that there is such thing as a dumb animal probably is one.

Oscar has an attitude of being a hands off bird, except when HE wants physical attention.  Once a day would be nice, but he's ok without going outside or interacting with the dog, or other things that would require cleaning my shirt in public.

He is an observant creature, watching my comings and goings throughout the day.  All I have to do is say something to him and his eyes will "Pin and Flash" and the outer ring of orange red gets very bright, indeed.

Never yell at a parrot, they can out shout you.  I learned that years ago and that if I wanted quiet in the house, I have to be quiet myself.  The stereo can get too loud and enter that zone that whatever is playing gains a parrot accompaniment of jungle sounds, "HELLO!", and laughs.

That laughter set him off.   We were watching Lisa Douglas be totally paranoid about a blue feather on Green Acres.  The TV was just at the border of the Parrot Zone when I laughed.  Oscar laughed back and launched into his chattering.

He did.   Oscar got louder.

Kevin said "Oscar if you don't quiet down, I'm going to cover you up!".

Reaching for the remote, I turned the TV down just as Oscar had the last word.

He let loose with a Raspberry of epic proportions.  A "Bi Labial Fricative".

Yes, I taught my parrot how to do a Bronx Cheer.

Then after he was finished, he laughed, feeling quite proud of himself.

Kevin asked "Did he just blow a raspberry?".