He's at it Again 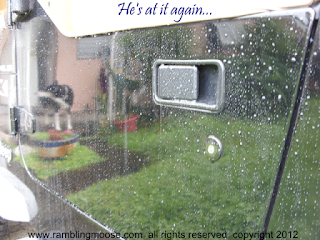 I'll push this door open with my nose.

Sniffing the air and looking around, I see him outside.  He's washing that big thing that goes fast.  It's ignored most of the time.  When he takes me inside it I get to watch him and go fast too.  After a while, I get tired and curl up to sleep, but it's nice all the same.

It's my job to watch over him.  He does some pretty crazy things from time to time so I keep order.

As soon as I smelled the rain and saw him grab the towels and the keys to that thing, I knew what he was doing.  It needed it.  It's been sitting there for weeks at a time never used.

There he goes shaking his hands at me to use the yard.  It's raining and I don't need to go.  I'll just smile at him and let him go on with his job.

One more time to get the dust off of it, and clean the sides down.   It's time for the dry towels to finish off.   I wonder if we're going for a ride? WagWagWag.  Not yet, he's back at the front washing more dust off of the grill.

At least he's finishing off the job, I'll go back in and have some water.

Now what happened here?  The big thing is back by the house.  I guess there's no ride today.  Dad's done.  Patting my head we're going back inside for the next big adventure.
Posted by Bill at 9:54 AM