Bamboo Smartphone and Tablet Docks are all done 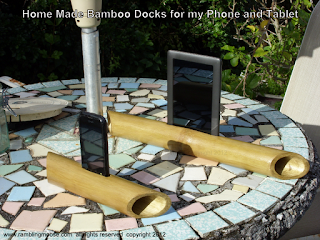 A while back a neighbor cut down a stand of bamboo that was as thick as your wrist.  I was able to take some of the scrap and cut it to size for a dock for my smartphones and larger ones for my tablets.

After taking the time to cut the wood and try the things out, I realized I really did want to finish the project by staining the bamboo inside and out with poly-seal.   Two coats later, they actually shimmer in the sunlight.  I may go another step further, but it really is pretty much "Furniture Quality" at this point.

Basically they work like the box that the drivers for your speakers for the stereo are contained in.  Give sound a box to bang around in and you get resonance and a louder, richer, and more directed sound.  More bass and better direction.  Since we're talking about the tiny little squeakers inside of a tablet, they need the help.

Even the one that cracked worked nicely when I screwed it down to a stand to hold it together.  Now that I have all of these docks, five in total, I'm finding that they have their uses.  Why run ugly wires to the top of the medicine chest in the bathroom for speakers when you already have the phone playing music?  One of the docks lives there perched six feet above the ground.

The trick is to not make the hole where you drop the phone or tablet too large.  If the sound leaks through the top of the dock, it can't be refocused out the ports on the side.  Since the Android phone I have and the iPhone 3G are almost identical in shape at the bottom, it works for all of my phones.

Other than that, unless I find more scrap bamboo or a reason to make more of these things, I'm probably done.  Nice little diversion of a project.  I got to the point where using mostly hand tools, I could make one in about an hour.  After all, what guy doesn't want an excuse to do some woodworking and make something "cool"?
Posted by Bill at 9:59 AM