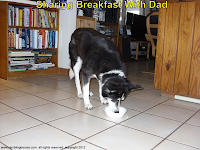 I realized that I was sharing breakfast with an old friend more and more these days.  It's the complete opposite of what we're used to doing, but when you're an old dog they make adjustments for you.

Dad knew just how much I could have and gave it to me in my bowl.  It said C, A, T on it.  I think he was playing a joke on me because I couldn't read.  It made him happy so I didn't care.

I started getting sick last year.  I'm getting up there in years, and Dad didn't realize that I didn't want the crunchy sheep any more.  He took me to the doctors that one day and I don't like that.   They treat me well, but I just don't like anyone poking me.

That was when Dad gave me strange food.  Some of it I liked a lot, others I wouldn't go near.   We all got real frustrated then until I showed him just what to get and what not to.

He slips once in a while and gives me peanut butter, but that makes me sick the next day.   I heard him say "no more".  I guess that's it for the peanut butter.

Lately I follow him more than usual.  I know my time may be short and I want to show him I still care as much as I can.

Breakfast time is the best time to follow Dad.  I'm a little slow on my feet now, so I have to stand back and stare at him.   He tells me that I "have the most beautiful brown eyes on the planet" and then gives me some of what he's having.

The other day he laughed as he gave me a bowl of this stuff called cottage cheese and said "I'm going to have to stop giving you this or you will stink up the place".  No idea what he means by that but it's OK.

I lick at that bowl until I can get enough out of it but it is hard to eat.  The bowl starts on one side of the house and ends up on the other.   I stopped just before it ended up going down the one step to that warm place in the back of the house.  Florida Room I heard it called.

Well, I'll have to catch you later.   The sun is out today and I can catch a nap there on my place near where Dad sleeps every night.  The sun makes me feel better and I like that.
Posted by Bill at 10:02 AM