A Prison For Plants In My Backyard 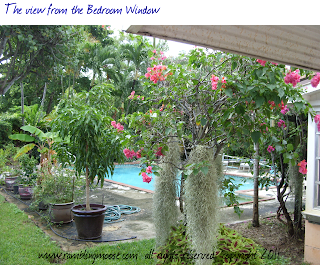 Next to the pool there is a line of pots.  In the line of pots there are plants.  Some do well, others are not very happy at all.

We've all had plants that are potbound.  Pop them out of the pot and you find a mass of roots on the outside of the ball, and the inside is fairly "empty" of roots.  Stick that into a larger pot and come back in a while, you'll find the same situation.

There's a scientific explanation for that.  The roots find the outside of the pot, sense that they can't grow any larger and limit their root growth.  Whether that means that the plant will grow more above ground is debatable.

I had that shown to me a while back.  In front of my house is a bottle brush tree.  It's slowly dying.  The inside is being eaten by termites and it won't survive.  That little island of garden around it used to have some ornamental grass that I removed.  There were too many weeds inside the grass and it was a nightmare to keep tidy.

Finally, we got irrigation lines sent out to the island and I was able to plant some plants.   Knowing that the tree would die eventually, the first thing I wanted was a tree to replace it.  Since "Someone Up There" wanted me to have a palm tree in a specific pot, that would go there.  I couldn't kill that tree anyway, it refused to let go of the pot when I tried to pull it out.  By the time I relocated it, the "involuntary palm tree" was up to 4 feet tall and a very happy plant in a burgundy fiberglass prison.

It took a sledge hammer and a hacksaw to break that fiberglass pot.  I'll keep that in mind because they're cheap and more durable than terracotta.

When I did finally get the root ball disconnected from the shards, I saw the same pattern.  A net of white roots around the outside of the pot, and a loose ball of soil being held together by fewer roots than I expected.

That tree is now out of the normal repotting shock and is beginning to grow in front.   Which ever bird dropped the palm nut into the pot all those months ago should be thanked, it's a rather nice palm.

We'll figure out what else to stick out there.   I have a few other plants in a prison in the backyard I can choose from.  I have my eye set on my yellow hibiscus that occasionally gets dined on by an insistent Iguana.

Don't get me started on Iguanas.  They don't belong here.

That or a cactus.  They even bloom.   Luckily they don't really need irrigation and planting low water plants is the goal.