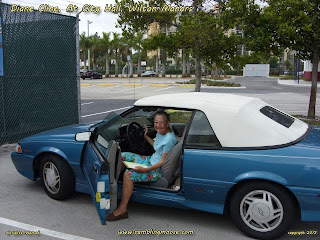 When you move to a new city, there are people who immediately grab your attention.  Some of these fall by the wayside, and you could never say that Diane Cline would fall away.

Some of my most powerful memories were of her in City Commission meetings in the City of Wilton Manors, Florida.  She was once on the City Council, back when it was called that.

She and some others were there trying to help bring people back.  It was a place that nobody knew its name.  You would call it East Ft Lauderdale if you were trying to sell the house.

Then the bar opened, and some life started to flicker back into the place.   Diane was there all the while, and you can easily say that she was directly responsible for the way the City looks today.  She would be at almost every Commission meeting giving suggestions to those who would listen, and letting those know who wronged her or her beloved Wilton Manors what they are doing wrong.  Some were told in no uncertain terms where they should go and where the boundaries of the City were so they could find themselves on the other side of that line, permanently, preferably.

At some point, Diane was given a sign.  I believe that it was made up by someone in one of the City Departments, but I can't be sure.   It is a street sign, looks quite official, and says "Diane's Way".  She said that they were talking about changing Wilton Drive or NE 26th Street to that, with a twinkle in her eye.  The Drive's name has never been changed but the sign should go on the wall in the Mayor's Office facing the Mayor to remind him of the progress that has been made since those bad old days of ineffective government and war zone avoidance.

The picture itself comes from one of the last days of the Old City Hall.  Diane met me at what was the Police Locker Room and Gym that morning to help sell off the contents of the building that had been moved to that room.   It was all to benefit the Wilton Manors Historical Society, another one of her many Good Works.  She and I spent the day rattling around the building, me taking pictures and helping to sell off some things, she was doing the same and giving the history behind some of the artifacts assembled while telling jokes.

One of the most important aspects of that knowledge came out with the Two Lane Initiative that was spearheaded by the Wilton Manors Development Alliance and Wilton Manors Main Street.  Diane came up with the germ of that idea that gradually picked up steam.   It is the Next Step in the re-creation of Wilton Manors, to take the City one step closer to being a true walkable city and an Urban Oasis.  With help, this plan will continue and finally take place now that the debts are being paid off and parking funds are finally being directed with some semblance of sanity to the work at hand.  Politics simply could not be separated from Diane, it was too much of what she was.  The Two Lane Initiative was something she was absolutely committed to, and its progress is absolutely an indication of the current relative capacity and competence of the City.

Diane was known for the best assortment of groaners and dirty jokes of anyone I could think of.  You could always be sure that if Diane was there, she'd have a joke to tell, and it always had a message behind it directed at something pertinent.  You would leave the conversation with the light bulb over your head flickering on and realize just who got the brunt of that zinger.

She was the conscience of this city in many ways, and will be sorely missed.   She was a friend, a confidant, and an amazing source of information.  If you didn't know Diane Cline, you probably didn't really know what was going on in Wilton Manors.

Diane, you will be missed by me and by all.