You are probably familiar with my favorite view of Miami.   It's actually Miami Beach, but there's a spot just off shore that shows the skyline of Ocean Drive where all those wonderful old Art Deco hotels are lit up.  They show off the colors of the buildings and turn them into a line of wedding cakes standing by the ocean glowing in the evening.  Centered on the Colony Hotel, this is a rather famous view used in many places such as the old Miami Vice TV Show.

Lighting these buildings is a tradition that will begin to show more often in the future.  The reason is that the cost to operate similar lighting installations will get much more cost effective with the advent of LED Lighting.  Being in South Florida, LED Lights also have the benefit of not being visible to Mosquitoes, and nobody wants to draw attention to themselves by those pests.

A typical LED lamp will burn a quarter of the power, on average, than a comparable Incandescent light bulb.   Since they are all considered low power, they may more easily be controlled by computer installations which will allow differing displays based on the whims of the owners.   Color shifting lights, flashing messages, and many more attention grabbing displays will become popular in the future as we learn how to use these lights.

I was considering putting in a line of LED lights under the eaves of my own house when I realized that it would burn less than 20 watts and light the entire front yard. 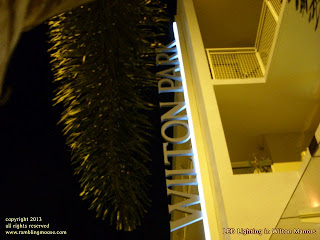 Large buildings looking for attention would be the more obvious choice for this sort of thing, especially in an Arts and Entertainment district such as our own Wilton Drive.  The largest building collection on the Drive is the Gables complex called Wilton Park.   Gables has a reputation for being forward thinking and when they're here, they're here to improve the cities they choose to place their apartment complexes.

It didn't surprise me when I started seeing changes to the facade of the building.  I didn't know what they were going to put there, but with their reputation, I knew that it would be interesting.

First there showed up a 12 foot-or-so LED tree that graces NE 21st Court overlooking their entrance to the community and visible from Wilton Drive and City Hall.   Now we have the long light strips of white LEDs that are lighting up a diffusing stripe.   They add a touch of class to an already impressive address that we will all appreciate once they are officially turned on.  The additional light on Wilton Drive will serve to enhance the block and the city and make Wilton Park a much more desirable place to open your business.

"Oh my office is in the Heart of Wilton Manors at the Gables.  Just look for the building with the light stripes!"

These light strips are apparently not "officially" turned on at this moment, but last night on my walk around town, I made it a point to have the camera when I took this picture.   This is only the first or second change to the facade of the building, and there will be more changes since they swapped out the bougainvillea that were there for some smaller plants and installed power drops for future installations.

They are here to stay and they're making the most of Wilton Drive and Wilton Manors.
Posted by Bill at 9:55 AM