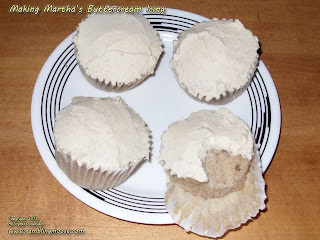 A Cake with Butter-cream Icing is one of my favorites.

Trust me, they are not difficult to make.

There's some sort of mystique around butter-cream icing, but really this was four ingredients and no cooking.

Just cream your butter that is room temperature.

Room temp butter is the trick because it blends really easily, and basically those cupcakes you see in the picture ... you know, that one with the bite taken out of it?

All I have to say was it was amazing.   The cupcake recipe was the Cinnamon no fry donut muffin things from last month, so a Honey Cinnamon butter-cream just makes it, well, amazing.

Now this is a Martha Stewart recipe, and her original is at this link.   The site is beautiful but doesn't lend itself toward printing since there are all these pictures on it.   When there are four ingredients, it might be a bit much.   I would say read her page too if you are a bit confused by my blather, but here we go with mine...


Ice your cakes or cupcakes while this is room temp.   While it will chill and store well in the refrigerator, it gets quite stiff since there isn't much that we're adding to the butter and sugar.

Like any icing, the longer you mix it, the more air it incorporates and the fluffier it gets - within reason.  If it is a bit too stiff, add a bit of milk while you mix it a teaspoon at a time.  I've never had to go with milk, but you may.

This goes well on Pancakes, Waffles, and of course any cupcake where there is a Cinnamon flavor.  I'm thinking about trying it with a Banana Bread next time I make the stuff.