Jerked Chicken and The Dog - Recipe 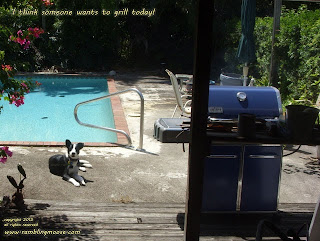 We finally, finally, got out to the restaurant supply store last week.

It had been a bit and I could actually see empty spots in the refrigerator.  Both sides!  Freezer and Fridge!

While out, there was a special on chicken breasts that worked out to $2 a pound and thinking back, I should have gotten more.

These were massive chicken breasts, double breasted actually.  10 pounds of chicken and about 5 double breasts.

While splitting all this up for the freezer I hear from the next room:

Hey!  How about Jerked Chicken?
Yeah!  We hadn't had that in ages!

We have a go-to recipe for Jerked Chicken marinade that always turns out well.

I mean *ALWAYS* turns out well.

I've tried making it from Scotch Bonnet peppers.  We've found Aunt Somebody or Other's marinade from somewhere in Jamaica, that was supposed to be the world's best.

We tried different ones and they were either too spicy or too weak or just blah.

This one ALWAYS works.

Believe it or not, it's McCormick's "Caribbean Jerk Seasoning".  There's this recipe for Marinade on the bottle.   We would buy it up in Pennsylvania when we could find it, but it's dead common here, so we had so much of it that it got "boring".

Can you believe that?  Boring?  Jerked Chicken?

I guess we needed to be away from it.

Peeling off two massive chicken breasts into a plastic bag, Kevin made up the marinade and poured it in where they rested from Friday until Sunday lunch hour.

When I went out to move the grill, Rack decided he wanted to explore the wilds of the backyard, so off he went.

I scraped down the grill, turned on the heat and let it burn off any of the excess grease.   When I went into the kitchen, Rack moved from His Spot under the Palm Tree to the other side of the pool.   Every time I looked out the back window, he got closer to the grill, cooking off extra grease in the sun.

He noticed my watching him from the window and gave me this "Come On, where's MINE?" look.  Usually he doesn't park himself on the concrete at lunch time in August.   It's just too hot on a black dog's fur, but the smell of the chicken beginning to cook drew him closer.

Yes, this recipe is simple and that good.   It works with any milder food, including Tofu, so if you're a vegetarian, this would be an amazing alternative.  Serve on rice with a bit of Pick-a-peppa sauce on the side.

The Recipe is pretty simple.  Make the marinade, and allow the chicken to soak in it "a couple hours".   Mine marinaded overnight for about 36 hours, but that is decidedly overkill.   A couple hours should do it.

Pull each piece out and grill with the marinade on them until the chicken is done at 160-170F.


Makes enough marinade for a pound and a half of chicken.

Combine the marinade and mix well, add the meats.   Allow to marinade a minimum of 30 minutes in the refrigerator.  Broil or Grill until done, turning frequently.

And now you know what my lunch is today, too!