How I Got Promoted To Pack Leader By My Dog - Picture 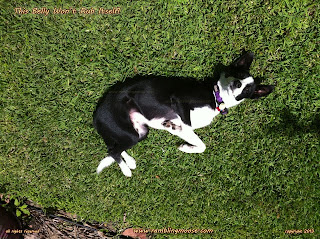 We have three long walks a day.  They can be more than five miles total on a good day, but usually closer to 3 one mile walks in any given day.

Through the neighborhood and out to Wilton Drive, there's a lot to keep a Mc Nab Dog interested.  Intelligent dogs need mental stimulation as well as physical stimulation, especially if you have a herding dog in any given city.

Give them a job and they're happy.  If you don't, good luck.  Obsessive Barking, Chasing cars or people, tearing up furniture, all of these are things I've heard about where someone takes a smart dog and expects it to train itself and "be pretty".

It simply doesn't work.  The more you work with any dog, the better your relationship will be.

Out on one of these long walks we began to put things together.  We realized that I was promoted to Pack Leader.

You see, Rack is a very timid dog.  He went through a couple months of hell after being "Owner Surrendered".  After a couple of scary and loud shelters, he ended up at The Dog Liberator right at the same time that my dog Lettie had passed away from a long bout of Chronic Renal Failure.  After the better part of a year of increasingly more difficult feedings, Lettie passed in my home on April 10th, 2013.

Three days later, I was ordered to find another dog.   I was a mess.  The House didn't feel right.  I started looking and found Rack online as dog number three.  He was shut down from his experience and managing the whole trauma of Surrender, Shelter, and Rescue very badly.   Luckily, schedules didn't mesh up for me to meet Giselle, who runs The Dog Liberator, for a week, and that gave Rack time to begin to heal in a positive atmosphere.

When we got him home on April 23rd, he was still shut down.   We walked him up the block and back to get him used to the neighborhood.   After all, he didn't know it was going to be the Forever Home, but he did need to lift his leg on a few trees before going to sleep.   Back at the house, he headed for the crate, but did stop to nibble a few things before bedding down.

We've had great luck watching him blossom, and the walks are getting better, but not perfect.   He still hates loud noises so when we get out to Wilton Drive, he's in full fear mode.  Putting on a brave front, he would try the Perpendicular Arm Wrench maneuver to try to get Off The Drive, but that didn't work.  I'm too big for him to move.

Usually by the time we get to the drive, he will have relieved himself.   I'd hand off the leash to Kevin and I'd have a present for the nearest trash can.

We were swapping back to my leading Rack on the walk out on the Drive but once we realized he was calming down, we got sloppy.   Kevin ended up with Rack's leash and walking him through the worst part of the walk - the noisy, bus and truck ridden five lane wide Wilton Drive.  Instead of my following them, I ended up in front.  It's the way we do malls anyway since people can't walk through me.  At 6'4" I tend to create a wall, so smaller people will follow me and let me break through crowds.

It also works for dogs.

Now, when Kevin has the leash, I'm ahead of him and Rack clearing the way.  Instead of Rack doing the Perpendicular Arm Wrench Maneuver, he's now watching every single move that I make.

I have become his pack leader and it is his job to watch what I'm doing.  I can handle the job, it's an easy one, and it means he's accepting where he should be in the pack.   It's much easier for a herding dog to have a job and a role, especially with a beta or submissive dog - following is a lot less work.

Lettie was an Alpha.  She never completely accepted being in a submissive position until the very end.  She would clear the way and walk ahead of us, and we never were able to get her to accept any other position.  She lived life on her terms.  A strong dog, it was amazing to see how she would work the crowd, decide who would be allowed to pet her, and she would block "impaired" people from her people.

Rack is definitely a beta.  He's getting stronger with some gentle handling.  He manages walks with me alone fine until it gets noisy, then all bets are off.  Time to run away from the noisy cars and trucks and get home... NOW.  But placing him in a middle of the pack place in the walk and he calms down and becomes much easier to deal with.

Just like anything in life, knowing what you can do is half the battle.  Having someone else to lead you can be a big help for a scared little dog.  Since every dog is different, I suspect this will change in time, but for now I'm stuck out front.  As a result of this, when I'm with him alone, his walks are getting better until his trigger gets pulled.  Neighbors taking out the trash can send him seeking his crate while we are in the house, let alone the large and noisy bendy bus on Route 50 blowing its brakes at a stop on a long walk.

Our best guess is that his being so very passive and so very scared is most likely what had him end up in the first of a number of shelters as an owner surrender.  It takes a much different discipline to train a dog that is afraid of a bus a block away than it does with another one who just wants to play or sit on a lap.  Not everyone cares to take the time to work with these dogs.  It's a shame because a gentle soul by your side can be the best thing that happened to you, even if you do have to watch for the big noisy things for them.

Our gain.  We're happy to have him, even if it does mean that I can't see him on the walk.

Fearful dogs are the ones that hide in the back of the shelters.  They're usually the ones who are most intelligent and are most upset by the trauma of the experience.   Most people don't want the work, but these are the dogs that become The Dog Of A Lifetime in the right hands.

Cesar Millan says "You get the dog you need." when speaking of this sort of a challenge.  They will bring out the best in the owners as long as the owners will listen.

Time to listen and seek them out.  They need it the most.  After all, it's a conversation of a lifetime.