Weeds In The Backyard are Very Different Here - Picture 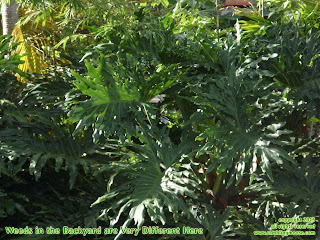 It's kind of overwhelming, gardening here.

If a seed falls on the ground, it will grow.

Going out to the backyard means that every day I could spend an hour pulling things that in colder climates are considered house plants.

I remember that in my house in Philadelphia, we had Mother In Law Tongue.  I tended them until one year they flowered.   The house was filled with a sickly sweet perfume.   Thinking that a bottle had gotten knocked over by my parrot or my dog, we went on a search and destroy mission.   There was a sticky group of flowers growing on one of the plants that was in the window.

By the time I moved here, we had about 4 window boxes of the stuff.   Every year from that point on, I would carefully snip the flowers off before they bloom and would be content with them there.

Here, it is a different story.   I pulled out a garden of Mother in Law Tongue that was about 20 feet long by 3 feet deep.  They were growing under the hedges and choking out the growth.   There was also a thick growth of Asparagus Fern intermixed with the Jasmine that I was trying to cultivate.

A hint here, those Asparagus Ferns that look so nice growing from a pot in the bathroom over the toilet tank should not be pulled by bare hands.  They have spines.   Nasty bloody weeds.

On the other hand, I have these Philodendrons here.  My sister would love them since there are three varieties in the backyard that I have found.   They're all growing in from places I can't reach. Little heart shaped leaves, others that are dinner plate sized, and the ones that I cut a leaf or three from time to time and stick in a vase.   The ones in a vase are three feet from stem to tip.

Have you ever tried to balance three large green leaves with cuts in the side.   They're quite striking, but in a vase, they are quite top heavy.  I still have that same vase that Mom had on her desk for decades before she departed.   It was at work with some of the same sort of plants that I aggressively pull out of the yard before they en-robe my shed.  Unfortunately for me, I'm not trying to root a dinky little heart shaped leaf that is the size of a child's palm.  Oh no, I am trying to balance something that looks like a sail inside of a slender pressed glass vase.

With a very curious dog in the house.

You see, every time the Cut Leafed Philodendron gets large, it sets off a chain of events.  The plant begins to encroach on the pool.   We cut a leaf or three off.   They go into the vase.  The vase comes into the house and looks quite nice on a little round table that is waist high.   Then the dog comes by and sniffs it.

What happens then is a cascade of a dog running with tail between the legs, a giant leaf nearly landing on it, and the splash of the water pouring out on furniture and floor.  Usually afterword, it's my sliding across the floor ready to meet it with a collision on a sheen of water.

On second thought, I'll leave the nature outside and just look at it from the window.