Herding the Human, It's Time To Go 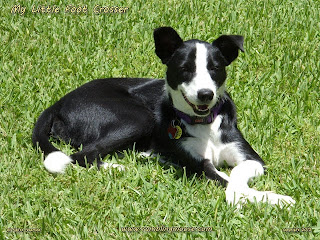 The Hunter, Orion was high in the pre-dawn skies.  He was guarding his companion, the shy Luna, who was showing only the barest fingernail of light.  Inky darkness greeted us as we turned left out of the driveway heading out toward our morning adventure.

Stopping at the foot of the road yet again to stare down an imagined foe, soldiering onward, and around the bend.

This was to be a morning walk.  Time for the daily constitutional, I was looking forward to the exercise.  Planning on a Mile and Two Thirds of distance, I wanted to cover the entire downtown of my little city.

It was a quiet one as well, there were few of the nearby sounds.   Being a cool if not chilly 73 degrees this early September morning, it felt invigorating on my skin.

Rack was watching the goings on and going about his business quickly.  Sniffing the rock, then pausing, he decided to follow along after a gentle nudge.

When we reached the park, I heard the truck back on the little Townhouse Isle.  Rattling its way through the beginning of the morning, it was trash day on my third of the Island.  I'd have to move the big blue trash can to the front of the yard when we got back.

A bounce in my step, I kept wondering why Rack would stop and stare.  The trash truck finally left Townhouse Isle and headed out to The Drive.

He kept staring at the now gone truck for a few seconds and begrudgingly moved on with me.

We walked past the construction and empty lot where we would turn up to the Drive.  I realized I was being guided when he walked past me to get to the other side of the intersection, different direction than usual.  Thinking that he had simply had enough of listening to monster trucks, the 50 bus, and boom cars, I shrugged and walked on.  After all, we had plenty of room to roam.

On the little triangle plot of land where there the duplexes were, Rack did more snuffling than usual.   He's a sniff-n-go kind of guy, doesn't usually linger.  All dogs will sniff, some are a trial to simply get out of the yard.  I'm fortunate that mine isn't that way.

A car starts up in the distance and Rack decides he has to listen.  Paws firmly planted on the asphalt, he waits longer than I think he should.   Gentle guidance gets him going to the end of the block.

The car passes and he simply doesn't move along.  Looking up at me, there is a questioning look in those nut brown eyes.

I am orbited from right side, to front.  Paused at my feet, then around to my left.  I've been herded.

I am led back into the lightening but still pre-dawn gloom.  Stars begin to slowly wink out.   We head home.  It's time to go.