Is it a Barometer or a Tail? 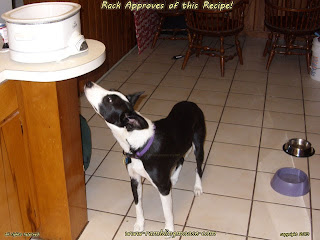 Rack may approve of the recipe I was putting together in the picture, but he wasn't really sure he should be sniffing around in the kitchen.

That's what the body language is telling me.  In fact, right after I snapped that shot, he left the room looking confused and walked back to his crate in the back bedroom.

Lately I've been paying closer attention to my dog's tail.  It's been talking to me.   Nothing really silly, but I realized that I have a very good measure of where "his head is at" simply by watching how he holds his tail.

Now, if you pay attention to your own dog, that should not be a massive breakthrough in dog psychology.  Happy dog wags tail.  Scared dog hides tail between legs.  That's pretty obvious.

On the other hand, the higher the tail tip, the happier the dog.

I had a visit from Ann down the block.   She was delivering some Avon to us, and she's one of the few people that Rack actually likes.   He's gotten territorial about people coming in the house so I will know by his firing off a quick WooWooWoo when someone walks up the driveway or drives up the walkway.

When Ann settled on the couch, she called him and he came over.  Head down slightly but tail wagging furiously.  However, it was down low as well.   He was saying I'm happy to see you, I'm acting submissive, and I'm not completely sure of my place in this but let me say hello nonetheless.

All was well when he finally got to Ann, and he enjoyed a good long pet.

While I'm out and about, Rack's tail is a very good judge of just how close we are to the big scary world of the trucks and buses that roll way too fast down Wilton Drive.   I don't know when the City is going to break down and finally follow the will of the vast majority of residents here and narrow Wilton Drive to two lanes, but I know of one dog that will greatly appreciate it.   That will force the people who obey the 30 MPH speed limit by driving "only" 40 MPH off of the Drive, and move the trucks elsewhere.

The closer to the Drive he gets, the lower the tip of that tail goes.   When I get close enough to the Drive, he'll actively try to herd me until I turn around.

I know what you're up to you silly mutt, you need the exposure, so ... not this time, lets go!

We've all heard and seen this sort of thing before.   It isn't any earth shattering news, however, Rack's tail is like the tone on a Theremin - the closer you get to it, the more the tone changes - or the lower the tail goes.

Ok, it's the opposite of the tone on the Theremin, but I'm sure you get the simile.

Surprising what you notice when you just pay a little better attention.   That mostly black tail with its last few white inches whipping in the breeze will tell me more now that I've made that particular connection.  Since I'm trying to work him through the trauma of being abandoned and then rescued, any bit of information will help.