You're Using Industrial Waste as Mulch? Why? - Picture 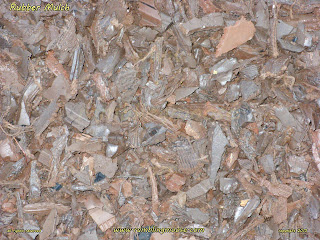 No, I really have not lost my mind.

For the most part, I live my life with as small of a "carbon footprint" as I can.  Walk everywhere, keep the A/C warmish, open windows when possible, Compact Florescent or LED lighting...

All that Green Stuff.

Green does help the bottom line since if you don't use it you don't buy it.

That clashes with my method of gardening, which is to say, badly.

When we moved in to this little house, there was an island in front.   Surrounded by bricks, it had this grass in it called Litrope.  Pretty stuff, but it wasn't thick enough to choke out weeds.   This being Florida, if there's a seed, it will sprout.   Lawns are an illogical invention here, as they don't make any sense anywhere except where you have sheep to crop them.

England, Wales, Scotland, Ireland... Sure.  But Florida?  In the City?  At least I have a herding dog...

Lawns use water, give little back, and pollute both air and ground water supplies with chemicals that you have to use to kill off the things that would normally eat the grass.   It's just as true here as it is elsewhere.   Silly tradition.

But they're pretty much required by law.

So back to the Island.

I kicked Gilligan off the island and made him take that damn Litrope with him.

For a while I kept it clear by using the weed eater to scalp it down to sand, but that was ugly.

I began planting cuttings from the garden as the most ecologically friendly alternative.   Red on one side, Green on the other, I have now two mature clumps of Screw Palms growing in.   An "Involuntary" palm tree sprouted in one of my plant pots in the back yard.   It wanted to be here, so I gave it a home.

The palm is now 5 feet tall.

There's a bottle brush tree that is termite infested and when it dies, I'll stump grind it if possible.

But those four clumps of green needed weeding.

Did I say I'm lousy at that?   I don't like the idea of going out to pull weeds from the garden when it's 90 degrees out, and it can be 90 degrees out at any month of the year.

Taking a page from the industrial gardeners, I scalped the soil again, then covered it with landscape cloth.  I used old wire hangers bent as hooks to "staple" the cloth to the soil and then we discussed what to do.

Mulch! Kevin helpfully suggested.
I agreed since I don't want to be out there, in the yard, every weekend, mooning passers by as I pull wandering Jew that wandered under the palms.

I want Rubber Mulch!  I insisted.

I won out.  I simply don't want the garden to be a home for weeds.   If nothing ever grows there but the three trees that are growing, I'm fine with it.

It's a test case.   If it works, I'm going to repeat this in the flower box by the front of the house, plus next to the Orange Tree.  I have to bend down to weed there and I just don't like disturbing that Orange.   It's growing but not completely happy about its home.

Plus it's an amusing mental game.   Go out to the yard and see what the pieces of rubber mulch have on them.   This one is a car tire.  The next one was a sneaker.   The third one was a hose or a basketball.

For now it's saving me work.  Plus the brown bits make for an interesting texture.  Bouncy when you walk on them, they just sit there venting off Tire Smell if the wind is right and it's late in the afternoon.