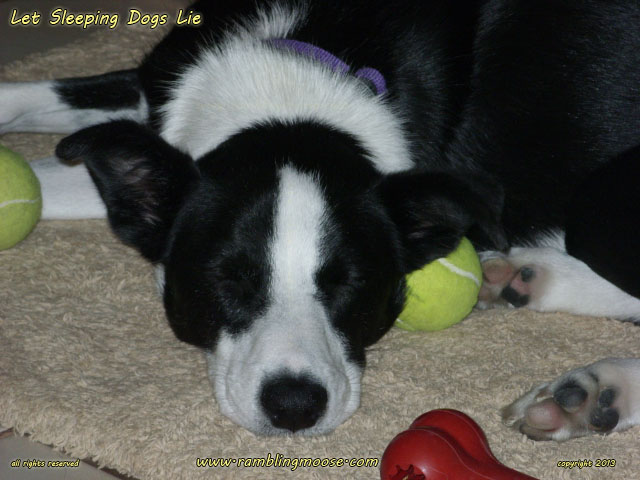 I can tell, the next dog walk will be a good one.

If we're out of the house for any block of time, Mr Dog's brain falls out of his head.   He becomes a cross between a two year old child and a kangaroo.

Bounding around the house between the two of us, jumping three feet in the air, and generally acting dumb is what we get for having the temerity of going out for some infraction such as getting the mail, stopping in the supermarket, or even just putting something in the car.   Once we get past whatever length of time that dogs see as "long", the Doggy IQ drops and we get silly.

In this case, we were home the required time and he had a good walk later on in the evening.

Coming in from the second walk of the day, he settled in on his mat, surrounded by his children.  The CookieBall (TM), Kong, and other toys kept him company as the year old dog plopped down and closed his eyes for the next exciting episode of lets wrench dad's shoulder!

In their natural habitat, the McNab dog is the superior cattle dog.  They will tirelessly work their charges around the ranch, running over hill and dale, chasing strays back to the herd, and making sure things run well.

South Florida's suburban sprawl isn't really their natural habitat, according to the ranchers and breeders that keep the McNab Dog breed going.  On the other hand, with the right person, it is a perfectly acceptable second choice.  Any herding breed, if you ignore them, will create work for themselves.  Ignore them at your own peril, you'll come home to an active dog happy that he helped you by destroying the cushions in your couch, pulled apart the mattress, or some such other thing that would make you completely lose your mind.

Serves you right for not taking them out for that long walk and stimulating their minds.   These are a breed of dog that needs a job.  You can be their job, I found that out with my old dog, Lettie.  She didn't glue herself to me, but she saw to it that things were done right and she could see one of us in our proper place.  Then she'd hunt out the other and try to nudge us together.

I could easily see a McNab as a service dog.  There is no other breed more intelligent.  They may be even smarter than Border Collies, I certainly rank them at least as smart.  But the personality being more calm and assertive means that they could be better suited for complex tasks.

Our house motto is "Trust In Dog".

If you look down because there's a wet nose at your hand, or more likely, at the back of your knee, it's time to ask what happened?  I've found that the pot on the stove was boiling over when Lettie was nudging me, Rack was sniffing at my phone when it was getting ready to fall off the table in a warning.  I'm sure as he learns our way of life, we will have another guardian as he learns well the concept of Yours, Mine, and Ours and what tastes good and what doesn't.

It is the same, but different.  We're not cattle, but the job is similar.

I taught Lettie the complex command "Show Me".  That is to say "you came and got me, now show me what you need".   Rack knows it now and he's only been with me for five months.   It isn't always food, I don't think McNabs are food driven - or at least my small sample of two hasn't been.  He may need to visit the rock or the tree in the yard.   That damn cat may be out back and doesn't belong.  I don't know, but one thing I'm sure about, I need to Trust In Dog and all will be well.

Now, if you'll excuse me, I hear the bell in the next room.   It fell off the freshly made bed and I think someone's paws are getting into Mischief!
Posted by Bill at 9:54 AM