The conversation started with "How would you like to borrow this?".

It has been about 3 years since the last time the pool area has been pressure washed and it needed it.

With Irrigation water that brings up mud, mildew and mold that coats things black, and algae that will grow in the slightest dampness, we have a rainbow of muck on the concrete surround for the pool.   That extends to the actual "deck" under the Lanai, the open area under the roof behind the kitchen as well.

There is so much muck that collects there that I have to be careful when I roll the barbecue grill out from under the roof.   If it has just rained or the orchids have been watered, the muck becomes slick and my natural reflexes from skating come into play as I slide on slick boards trying to gain traction.

On the other hand, I'm not the best at cleaning this stuff.   The pressure washer has a jet that goes from a pinpoint to a flat spray.   The flat spray is best because that will cover the most area.  One slight drawback, while you are painting an area with the water to clear off the muck, your arm is trembling from the exertion. 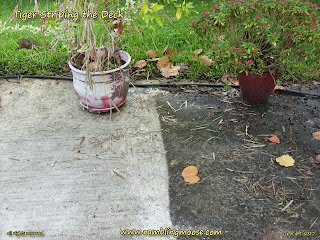 The result is in the picture.  I now have clean concrete that is "tiger striped" with what I missed.

The entire deck surrounds a 16 by 32 foot swimming pool that my sister would have loved in her Swimming Baby Years, and goes down to 7 feet deep.   I'm indifferent to having it, it seems like a lot of work, but it is pretty to look out at while the duck floats on top with the thermometer stuffed up its guts.

I still have two sessions of work to go on it.   I have done 4 sessions of 90 minutes of work a piece.  Add to it the "I'm beat" accidental collapse into the pool afterwords, and it basically soaks up as much time as it does water.

Right now it looks like a Bugs Bunny Cartoon of the Mason Dixon Line where the North is all dark and dreary and the South is a scene out of a plantation, all scrubbed and clean.  My own Mason Dixon Line beckons me with the promise of more work bent over sweeping from left to right.

I don't know how to get rid of the tiger stripes, but since I have partial custody of the pressure washer thanks to Billy and Lisa across the street, it won't get as bad as you see in the picture.   Thanks guys, you're great!
Posted by Bill at 10:00 AM