The Story of My Curried Chicken - Picture 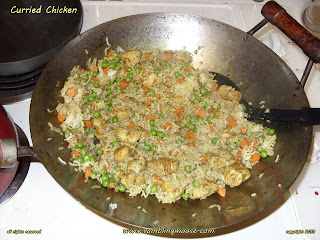 Anything I make in a Wok has a story in it.  This is what happens when I get bored and I have a kitchen nearby.  Curried Chicken Stirfry.

The Wok itself was given to me back in the 80s by a good friend, Greg.  I've kept it and used it fairly heavily over the years.  I think well of the wok and think well of Greg every time I use it.

If you're making something in a wok and using a recipe, chances are that you're new at that recipe, or simply new at cooking in a wok.

Amazing to you, that is since you season it to your own tastes when you make it.

Just keep a few things in mind.
Every time I start to cook with this wok, I have to find it first.  Small kitchen means things are tucked away in strange places like under the kitchen table.  Give it a quick once over for dust or "things" that don't belong.

Place the wok on the burner at medium.
Find the right oil - Sesame oil is best for strong flavored foods and savory things, Chili oil if it's "spicy hot".
Most other things get olive oil for me.
Don't smoke that oil, did you hear me?

Toss a few anise seeds in the wok.   Once they begin to crackle, you are ready for your chicken or other meats.

Everything should be cut to fit the mouth, if you have to use a knife, you're doing it wrong.  Diane told me that up in New Jersey when I was a wee brat and it stuck with me.

I hear you, no, this was a different Diane.  She was originally from El Paso, and a very interesting woman indeed.

Cube up about a pound and a half of chicken, roughly.   Can't go wrong with either a little more or a little less.

The rice I started cooking separately in a rice cooker a half hour before.   It goes in last.   Rice will soak up your extra sauce and give you a nice dry-but-not-too-dry consistency.

Toss the chicken chunks in.
Add your spices and a tablespoon or three of curry powder.  Should be "to taste", so if you don't like curry, leave it out.  I like curry.  The house still smells like the stuff a day later.

Stir the chicken often.   When it "looks cooked", find the largest chunk, then cut it open.   If I can't get it to break open with the spatula, then it's not ready.   It should look cooked well, no pink.

Now that the chicken was done, I added a pound of "Frozen Peas and Carrots Medley".  Yes, of course they were warmed in the microwave beforehand, it would freeze up the wok if you tossed them in cold!  "Hand warm" would be fine, they are already cooked and you don't want Mushy Peas do you?

You do want mushy peas?  You must be British... not that there is anything wrong with that!

Now that the peas and carrots have warmed to temperature, toss in the rice from the rice cooker.   The rice will still be hot, so don't burn your hands.  The rice cooker likes 3/4 cup of Basmati rice, 3 cups of water, 1 tablespoon of butter.

No, I don't know why the butter.  I've been told it is so the rice doesn't stick.   I like my rice sticky in stir fried food.  Just me I guess.

Turn off the burner and give it a couple quick stirs.  Everything will cook nicely and be coated well with a sheen of curry and oil.

Don't like chicken?  I could tell you that this recipe works well with other meats too but I won't.   That and tofu.   Pull up a chair and we'll talk about that more...