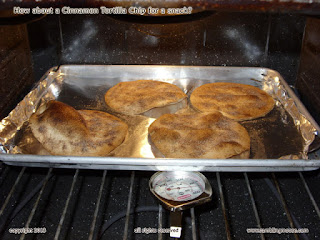 I figured, hey this is going up on Friday and most of this week has been recipes, so... lets ruin the diet again!

On the other hand, each of those tortillas as prepared is right around 100 calories.  Once you break them into chunks, then the calories get smaller right?

Here is another one of those Dead Simple Recipes that I like to share!  Besides, it's a rare kid that didn't make Cinnamon Toast when they were a wee brat like we did...

This is one of those recipes that is tough to get wrong.

I guess if you are distracted and walk away from the oven you could burn them, but Cinnamon and Sugar is a wonderful taste so you really can't ruin this even if you are banned from every kitchen on the face of the planet.  If you only wanted one, you could even do this recipe in a toaster oven.

Oh as a drink to wash this down, have a tablespoon of Cinnamon, two tablespoons of honey, and add 8 to 10 ounces of boiling water.   Allow to cool and serve with Ice.   Healthy drink that has only 120 calories!

There, did that drink redeem me?