Have A Mango - Picture 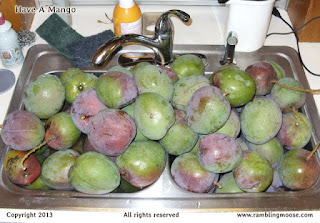 I was helping the neighbor this weekend.

They had a problem.  About 100 pounds of mangoes.  On a tree.  A BIG tree with BIG mangoes. Oh... there may be a second crop this year on that tree too.

The largest of that giant pile of fruit is around 2 pounds.  Almost a Kilogram for my Metric Readers.

If one of those monsters fall from the sky, you're going to have a bad day.  Or you will lose windshield.

The neighbor knows that I like mangoes, and since I won't eat all of them, I'll pass some of them out to friends who do.  After all, who can eat 100 pounds of fruit?   On top of it all, this is a Haden Mango tree.  There are many varieties of Mangoes in the world, but this one is my favorite.

The tree is right next to the driveway so that was the first side that we hit.  The tree being 30 feet tall, it took some effort to get to the ones that were highest.

We stood on the corner with a fruit pole extended to its maximum, then duct taped another pole to it for another 10 feet.  Since I was the tallest one around, I was elected.  Picking two at a time meant that there were four pounds of the fruit in a little metal basket on the end of a 20 foot tall pole.  Think of a lever.   We only lost one or two from the weight at the end getting out of control.

Beyond giving passers by some entertainment, we ended up with three large buckets of fruit, which gave me a totally full kitchen sink and a little more to spare.  After all, you don't stand on a busy corner with a long pole that has an orange basket on the end pulling fruit down without having a bit of a crowd.  Bucket after bucket went home, the work ended and the result was a kitchen sink full of the stuff.

The Spring bounty of fruit has arrived.  We'll be looking for a good Mango recipe or five.  I want to find a decent Mango Jelly, perhaps a Mango Butter, and yes they are different things.  I remember this recipe we made called Mango Chicken.  First you take mangoes, add Lemon Juice, puree... what happened after that didn't matter because you then had to keep me out of the mixing bowl with my trusty teaspoon because that was some of the finest pudding I have ever had.