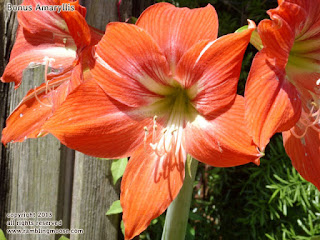 I'll admit it, I'm a bit of a lousy gardener.

Oh sure, I can get some things to grow or come back, but when it comes to keeping the flower beds tidy and free of weeds, I'm overwhelmed.

I was out back the other day trying to get the dog used to his new home.  Since he's terrified of any loud noises, I have to be aware of where he is at any moment.

We have only had him for a little over two weeks, so he's still getting used to us and the environment.

First, dragging him outside the back door was a training issue.  You see the back door is a heavy sliding glass door that makes a lot of noise when it is moved.

It reminds me of a trolley rolling down hill.
Out of control.
On rusty rails.
Over the speed-limit.

So how did I solve that?  I added to the noise by hanging some bells on the door.   Now when the door is opened, it sounds like someone put an elephant on that trolley and is holding a wedding ceremony.   At least that is where I got the original set of bells, from my sister's wedding.   She may not have her bells any longer but I have those and the candles that were on the table displays that she didn't want.

Yes, Pat, I kept them.  They make me feel happy.

They don't make my dog, Rack, feel happy at all.

The first time he went to that door, and I opened the latch, he was gone in a flash of black and white fur.  I calmed him down, and managed to get him back to the door.   Picking the bar out of place sent him running a second time.  The door was actually opened with him there, but my hand firmly planted under his collar.

Purple collar.   Stands for a dog that has some issues.   He's not a Red Collar dog, by any means.

So we finally got outside and well away from the trolley tracks and eventually calmed down.

What to do with him that I have him out there?

He managed to follow me around the yard, distantly, after sniffing the pool and judging that maybe it isn't quite right for a fearful little guy, and found his spot.   He has two of them, one under the big palm that can be seen from space.  It's a 30 footer, and quite imposing, so I suspect a little dog felt safe under it.   The second spot is next to the Tiki Bar under the Jasmine Hedge.

I prefer the palm tree since it is out in the open.   I don't have to wrestle with plants if I want to get him inside quickly.

Walking around the yard I pretended to know what I was doing while pulling weeds from the pots and noticed the Amaryllis.  Just like the Mango tree around the corner, it's putting out a second set of blooms.  Rack couldn't care less, he just parked at Dog Rest Station closest to me and let me go about my little fantasy of knowing what to pull in the pots.

If it's a vine, pull it, which is ironic since my yard is the perfect place for Virginia Creeper, Stinkweed Vines, and Asparagus Ferns.

After an hour of communing with nature and considering the benefits of Napalm use on the residential Floridian gardening scene as well as the possibility of introducing a goat to the yard, I realized that a mostly black dog with white accents might be a bit warm on a mid-80s day and my own back was striped with perspiration.

Time to go inside and recuperate from the fearful back door drama.  Come on, Boy! Time to go!  I need to get to the home improvement store and get some asphalt.  The yard will look great dressed in Basic Black!