Training the Dog to Stay Out Of The Trash 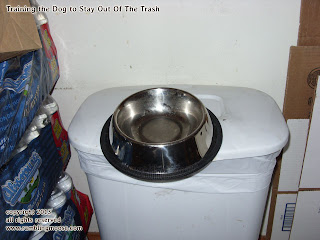 When I hear myself tell this story, I wonder whether it is Dog Training or Humor.

I think it really is a little bit of both and more.

We just got Rack, our little Mc Nab Dog rescue home.  Mind you, every dog has inborn curiosity.  Puppies are usually very curious.  They have to be taught what the rules are.

This being taught is usually something that Momma Dog will do, and if you are not in a puppy mill situation, the puppy should never go to their new home before 8 weeks.   Some say more, some say less.  Be conservative.  Momma Dog will teach the puppy how to play.   If those razor sharp teeth nip too hard, puppy will get taught just how that can feel.   Nippy puppies would most likely be the ones that didn't get taught by Momma.

So if you're lucky, you will find yourself with a warm bundle of fur that will be a companion for the rest of their life, knowing that you don't pull on the next dog's tail or bite its ear.

After all, nobody likes their tail getting bit, do they?

Now, the natural state of Canis Familiaris is to be a companion.  The Dog is not a Wolf, they do badly if they're out in the wild left to fend for themselves.  They will find food where they can and the best you can hope for is to be found by someone and taken in.  Given a job, a dog is most happy, but they do need to learn how to behave in a house.

House broken, don't chew on the furniture, paws off the counters.  These are all things we have to teach our Best Friends.

When I got my little guy, Rack, he had been through a lot.  A shelter that sounded more like a Concentration Camp, followed by a better one, and then an excellent shelter for Herding Dog breeds at The Dog Liberator.

Being a fearful and shy dog, he didn't have much of a chance to be taught indoor manners.  Intelligent dogs suffer terribly by being in a shelter, they collapse under the stress.  That was how I got Rack.  He needs a steady and gentle hand for training for The Next Level.

The first night was exciting enough, we placed him in his crate and allowed him to rest.   It was a lot to take in when you're only 7 months old.

The next day was exciting.  He came out of his crate, we got to see the other dogs, we walked around the neighborhood learning the lay of the land.   We realized that he's pretty much housebroken, which is a major benefit of having a Rescued dog.   They are vetted for that sort of thing and the most important things like hygene are dealt with.

As he relaxed, he began to show his intelligence and curiosity.

Rack sniffed Oscar the Parrot's cage.  Oscar is named well, being Green and Crotchety, he lunged at the curious puppy and banged his beak on the side of the cage.   Rack backed off realizing this bird is not looking to be friendly.

Then he went for an exploring run.

We heard the thump of the lid on the kitchen trash.  Looking at each other we realized that we had to make sure that he didn't tear the place apart.

Yes, you guessed it, there's that stainless steel dog bowl perched on top of the trash as a result.

Momma Dog is not here, Daddy Bill is.  School is in.

We didn't hear the lid of the trash can thump.  What we heard was the CRASH! of that metal bowl as it hit the hard tile floor in the kitchen.   Immediately we heard Rack's toes try to make a purchase on that floor.  He came with his paws overly trimmed, toenails didn't reach the floor quite yet, but we heard them that time...

I saw a black and white streak come running around the corner, past the crate.   He was still scrabbling to get a purchase.  I smiled thinking that outdoors, he's going to be a fast little boy.

I also realized he wouldn't be in the trash again.

Shooting past the crate, his momentum carried him across the living room, around the coffee table, and past my legs.   He ran from the one side of the living room into the crate.

Panting from the effort, the little dog got his lesson.

And that was how we stopped the dog from sniffing the trash can.

He's been in the kitchen before but he carefully avoids that can.  It's a useful barrier.

I will say that instead of a steel bowl, from this point onwards, I have some "jingle bells" that I got last holiday season.  I'll have a little festive warning instead of a crash.   I don't think I'll need it until the next time he is left unsupervised, but for now, I'll use it as a crutch or much more gentle reminder.